British confectionery company Cadbury has revealed a new global brand identity, which aims to put a “distinctive and modern twist” on the brand’s heritage. It is the first major brand overhaul for the company since the 1960s.

The project was led by international design studio Bulletproof, and features a redrawn wordmark and new iconography and typography.

At the centre of the redesign is Cadbury’s new wordmark.

“The old design has been very successful but over time had failed to reflect the quality and care that lies at the brands roots,” says Nik Rees, global creative director at Bulletproof. “When looking back into the archives at Cadbury Bournville, we were ultimately inspired by the founding principles of John Cadbury.”

The redrawn logo takes its inspiration from the signature of founder John Cadbury’s grandson William, which first made a commercial appearance for the brand on the back of Cadbury trucks in the 1920s.

It is lighter and more cursive than its predecessor, with the Bulletproof team explaining the intention was to create a “beautifully crafted signature with a more contemporary feel”.

Elsewhere, Cadbury’s “Glass and a Half” icon has also been redrawn. Like the original signature wordmark, the Glass and a Half logo was first introduced in the 1920s.

This new iteration sees a chocolate chunk included in the mark, unlike the previous version. Bulletproof explains this is so that consumers can more clearly recognise the link between ingredients and product. It is, according to Rees, a “direct and beautiful display of generosity”. 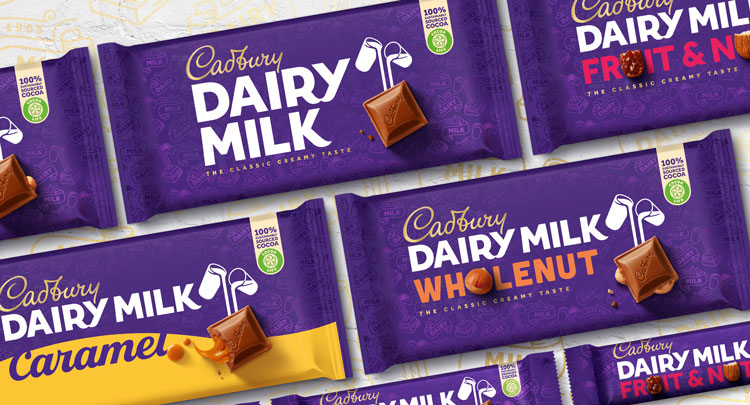 Inspired by the Cadbury archives

The challenge throughout the project, Rees explains, was to reimagine the brand, while staying true to consumer perception.

“Consumers in each market globally feel a sense of ownership over the brand,” he says. “This is of course a huge responsibility [and] we wanted to create a global set of principles and assets that could be flexed and nuanced respectfully to local markets, so that Cadbury could continue to be each nation’s favourite.”

Beyond the brand’s well-known marks, the Bulletproof team has also helped redesign the packaging for the Cadbury Dairy Milk range.

For this, the team again looked to the Cadbury archives. The new Dairy Milk logotype features an all-caps, heavier typeface which has been recrafted from the original packaging for the chocolate bar from 1905.

Also from the 1905 bar, the team was able to create a “distinctive Dairy Milk pattern”, which will be subtly featured on the purple background of all product packaging. The aim of including this pattern is to give “a greater depth and purpose” to the packaging, while also providing “an element of discovery”.

The purple packaging is already a significant part of the Cadbury brand, as evidenced by the company’s High Court battle back in 2012, for exclusive rights to use its signature Pantone 2685C. 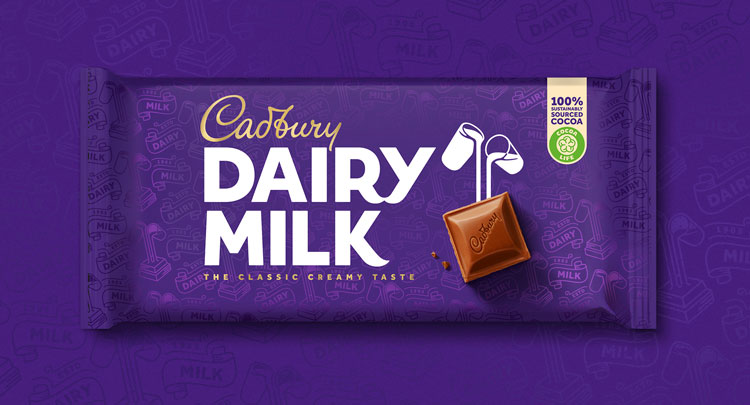 The team also chose to include the logo of the Cocoa Life sustainability programme on the front of each bar. The initiative, which has trained more than 140,000 cocoa farmers to look after the environment, has been a core part of Cadbury operations for the last eight years.

As the brand continues to look toward sustainability, the team says the inclusion of the logo helps to reinforce this “long-standing commitment to cocoa farmers and the environment”. 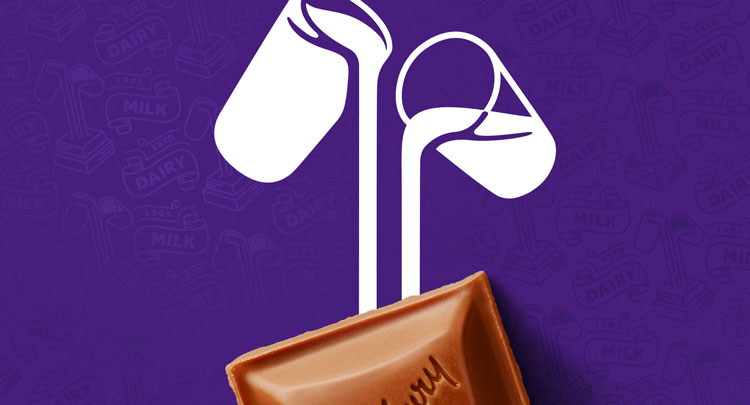 Cadbury’s design past and future

While this new look marks the brand’s first major image overhaul since the 1960s, Cadbury has worked with a host of design studios in the recent past.

Back in 2013, Pearlfisher refreshed the identity for the Dairy Milk brand, while Design Bridge has collaborated with the company on various Easter campaigns and Christmas products over the years.

Similarly, Bulletproof has also worked with the brand before on the identity of its Marvellous Creations range back in 2013.

This new look will first be launched in Australia in May, followed by South Africa and Malaysia later this year. The UK and Ireland will begin to see the new identity at the beginning of 2021.