So often, fitting out these spaces with the facilities and tools needed can be expensive and time consuming, Smiths says. This means commercial units frequently sit unoccupied, while fledgling creatives make do with makeshift workspaces.

In response to this, Nowdio offers a low-cost, environmentally friendly design system. It provides designers with an appropriate and customisable space in which to work, with all elements being completely reusable and buildable by the designers themselves.

“By creating a self-build system, not only does this help keep the cost down for the user, but also keeps the majority of the noisy, messy manufacture off-site,” says Smith. 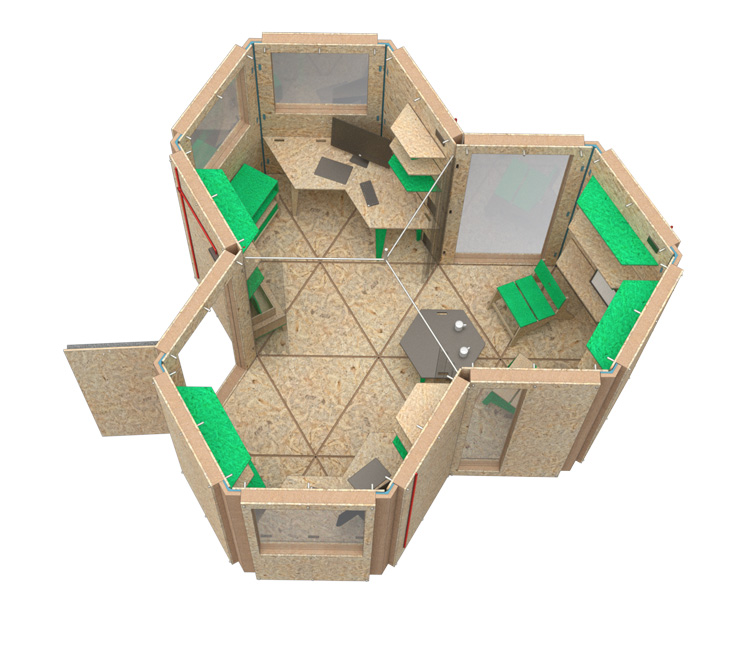 “If you can manage IKEA, you’ll be fine with Nowdio”

The process of building each module has been designed for ease of assembly, Smith says. More complex elements of the modules come pre-assembled. Additionally, all pieces have been developed to fit inside a standard transit-style van, for ease of transport.

“If you can manage to construct IKEA furniture, you’ll be fine with the Nowdio,” she explains.

Different modules can be connected depending on the space needed – the solution offers things like in-built desks, storage, sinks and tables. Panels of the modules come pre-drilled with locations for fixtures and fittings, Smith explains. Users can also add things to the walls and other surfaces.

As the project develops, Smith says more components will be introduced and refined.

“If people are going to leave the comfort of their slippers behind, there needs to be a benefit”

One of the overarching considerations for the Nowdio system was facilitating designers working around each other, Smith says.

“We wanted to create a system which could operate independently, or as clusters, creating a community around the individual studios,” she says.

“As designers we greatly miss the bustle of the studio; if people are going to leave the comfort of their slippers behind to get back to the studio there needs to be a benefit and we see that as the interaction with other lovely creative humans.” 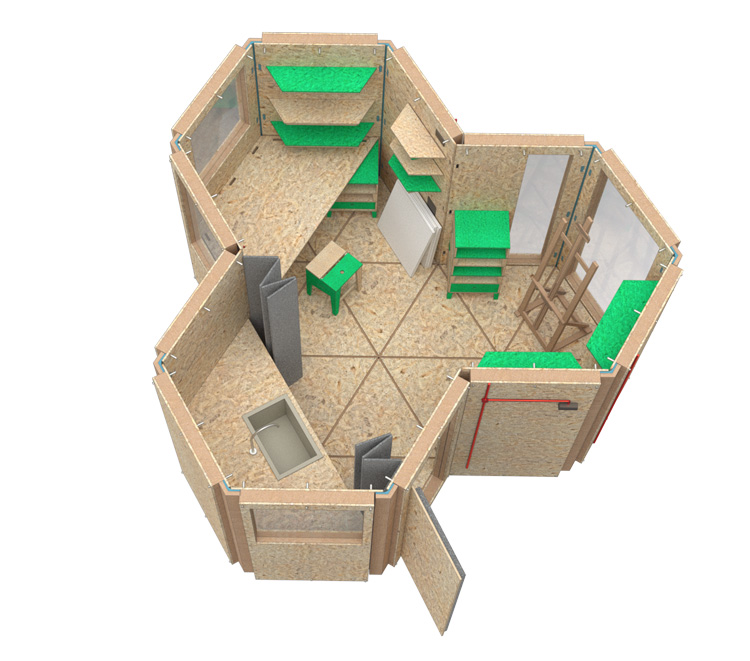 “Every element of our studio disassembles”

The other consideration was making the whole thing sustainable. Short-term fit-out often leads to a lot of waste in landfill, Smith says.

“Every element of our studio disassembles easily back to its individual parts allowing them to be reused, repurposed or returned to be recycled,” she says.

However sustainability has presented its challenges. Smith gives the example of portability: “[We need] to keep the weight down, but then when used structurally the most environmentally friendly durable materials tend to be heavier than their less sustainable counterparts.”

The future of “Nowdio working”

The idea has been supported by the Mayor’s Resilience Fund, which is delivered in partnership with Nesta Challenges and funded by the London Economic Action Partnership (LEAP). The fund will commit £1 million towards the competition’s most impressive innovations, across a selection of different challenges.

Nowdio is a response to the fund’s Affordable Workspaces Challenge. As the team approaches the end of Stage 1, they are now looking to find developers and investors to help trial prototype modules in a pilot space.

Smith says the team is also looking for designers who would be keen to attempt “Nowdio working”.