“We have sought to bring the history of design to life,” V&A senior curator of design and digital Corinna Gardner says of the museum’s latest gallery, 1900-Now. The space brings together an eclectic mix of some 250 objects – around 40 are new acquisitions – to tell the story of the past century through design. While some familiar pieces are present, others may surprise: a Wi-Fi Barbie or Spanx for men, for instance. As Gardner explains: “It doesn’t lean on the great figures or indeed the accepted canon – they are there and given their due, but it’s not a series of stylistic movements.”

The new permanent gallery is situated in what used to be the 20th Century gallery, redisplaying the museum’s Rapid Response Collecting programme for the first time, objects from existing collections as well as a host of recent acquisitions. Eschewing a strictly chronological structure, the gallery has been divided into five themes; Housing and Living, Crisis and Conflict, Data and Communication, Sustainability and Subversion and Consumption and Identity. According to the museum’s curator of 20th century and contemporary furniture Johanna Agerman Ross, these themes were conceived in autumn 2018.

“We started by looking at what really engages contemporary audiences,” Ross says, which meant a broad survey of newspaper coverage and Google searches. In deciding what should be included, the lead curators asked: “What are people worried about, excited about, concerned about?” Once those themes had been recognised, the curators examined how they had been reflected back into history. “We had a starting point of now but looked back into history to see how it could be mapped onto a historical understanding of the last 120 years,” Ross says.

From Kim Kardashian to the labour market 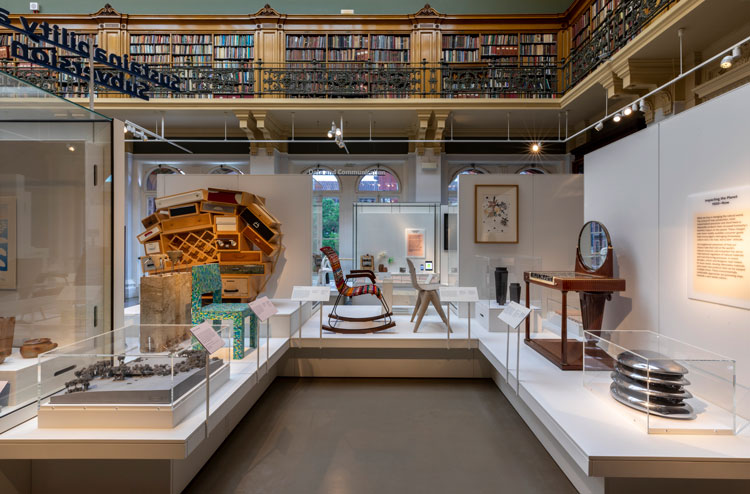 This raised interesting links through the period, Ross explains. Some issues that concern us today – such as automation in the workplace – were just as much as a worry in the early 1900s with the advent of production lines in factories, for example. Other objects, such as a poster about mass-radiography technology for Tuberculosis highlight how a contagious and life-threatening condition has affected humanity before in the past century.

The gallery brings these themes into sharp focus. A tech-integrated version of the popular Aeron desk chair, designed by Don Chadwick and Bill Stumpf with the Herman Miller team, highlights the rise in office work since the 1950s and its inevitable convergence with technology. It’s positioned next to a handheld pocket computer from the 1990s, a precursor to smart devices that enable work on-the-go. And alongside these objects is a promotional publication from furniture manufacturer Vitra, published between European lockdowns last year, which considers the return to work, promoting blended working – work from home and the office. 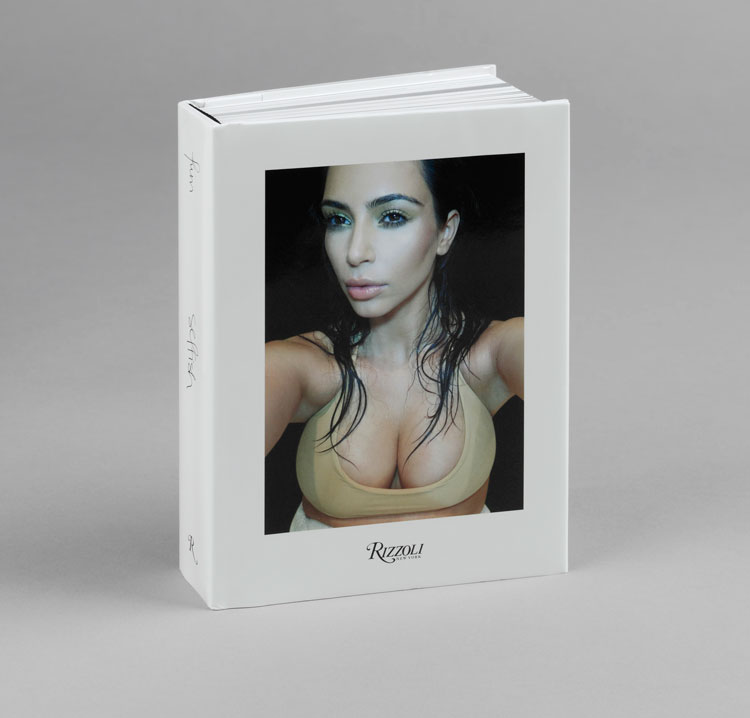 Consumption and Identity examines consumer trends and how objects have developed in conjunction with changing identities. It’s here that Rizzoli’s book of Kim Kardashian’s selfies can be found. “Kim Kardashian designs her body,” Gardner says. “She uses social media as a tool to make a product that is hugely successful and deeply compelling.”

This is put in conversation with items like a driving jacket designed to celebrate the removal of the ban on women drivers in Saudi Arabia and Spanx underwear for men as a way to consider our “shared opportunity and anxiety”, Gardner says. Whether they represent opportunity or anxiety will depend on perspective, and this changeability is echoed in the next section – entitled Sustainability and Subversion – which follows sustainability from its radical beginnings to a mainstream goal.

A different perspective on design

Despite the gallery’s ambition to attract a younger audience into the design field, it does not shy away from loftier topics over the last century – like the role of the professional designer or when ‘designer’ became a moniker for objects. Perhaps most noticeable is the gallery’s approach to the canon, the diversity of which has been a much-discussed topic in recent years. “It’s important for us to recognise that the museum collection has a long way to go to be as inclusive and diverse as we would want,” Ross says. The space includes less-familiar designers such as Huren Marsh, a Jamaican born designer who resides in the UK. The shape of Marsh’s wooden chair is inspired both by Ghanaian fertility doll Akuaba and early 20th century European design trends.

There’s also fabric from Althea McNish, a textile designer originally from Trinidad whose Caribbean-influenced fabrics were popular in British fashion and furnishing companies in the 1960s and 70s. Black graphic designer Thomas Miller, based in Chicago, US until his death in 2012, is also featured. Miller designed for 7up in the 1970s, when the fizzy drink was hoping to rival Coca-Cola for sales. His design of a portable radio, in the shape of a 7up can, has a bubbly font to mirror the drink. 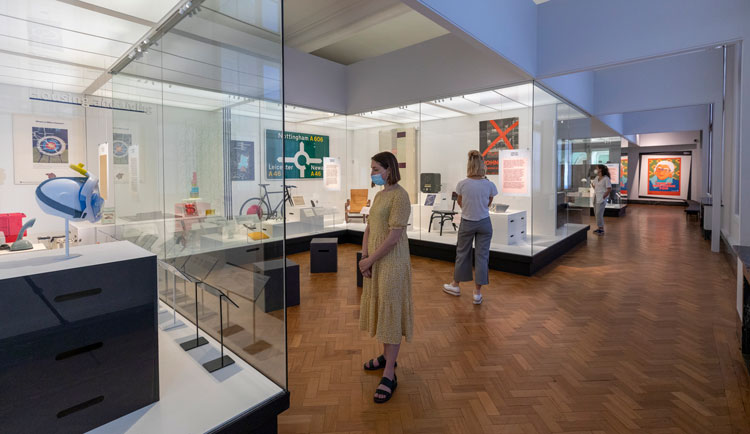 This expanded focus hopes to provide alternative perspectives. Ross points to a rocking chair, designed by Indian studio Sahil & Sarthak. The chair features a recycled fabric which forms a rope-like seat. “It’s immensely colourful and beautiful to look at,” Ross explains. “It’s unlike many things you’d consider seeing in a 20th century design gallery.” This contrast with the past century’s more familiar designs (think the Monobloc seat or Breuer’s cantilevered chair) brings joy to people, according to the curator. “It makes you wonder what has been established and what a different perspective people have on the design field,” she adds.

Another ambition was to question accepted terms. As Ross explains, “sometimes it’s about moving away from the designer epithet.” The gallery’s objects have a “recognition factor” that may prompt more casual visitors to consider the role of design in their own lives. “People will recognise things they carry in their pockets, such as their iPhone, and things they might have seen in their grandmother’s kitchen cupboard,” Ross says.

While the new space attempts to capture over a century of social and political events, it would be hard to deny the significance of the previous year and a half. More recent history is mostly reflected in the Rapid Response collection, which speak to the “twin pandemics”, as Gardner calls them: the recent social and racial call to justice and coronavirus. Objects include 3D-printed door handles and a repurposed scuba mask used as a breathing apparatus.

The multi-year framework provides further echoes here. One poster from the Student Non-Violent Coordinating Committee – an American civil rights-era organisation – depicts three men taking the knee, a racial gesture still used by many sports stars today. Its title reads: ‘Come let us build a better world together’. “We’ve started this conversation about the challenges today and how they are informed by the recent past, which feels like a rich vein and should be adaptable over a period of time,” Gardner adds. 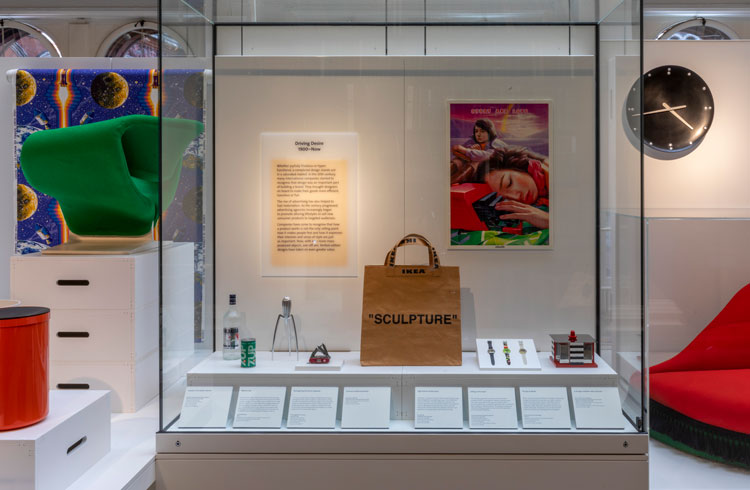 Current concerns around sustainability are also mirrored in the gallery’s physical space, which is a reuse of existing infrastructure, designed in-house. “We were tasked with creating a space in a resourceful manner,” she adds. “That feels appropriate in today’s world.” That’s not to say the museum will not be hosting blockbuster displays of design in the future – as the current Alice in Wonderland exhibition is testament to – but the approach felt right for now, according to the curators.

Both Gardner and Ross stress that the work starts when the galleries open to the public. Visitors are encouraged to interact with the objects on social media through a designated hashtag. Their ambition is that the space creates conversations. “I hope we provoke some reaction,” Gardner says. “We are seeking to tell the story of design in the round, but in the round means an openness and an enfranchisement of multiple views.”

“You can only have a discursive space if you listen,” she adds. “These galleries are a theatre of activity.”

You can find more information on the 1900-Now gallery (including opening times) on the V&A’s website.