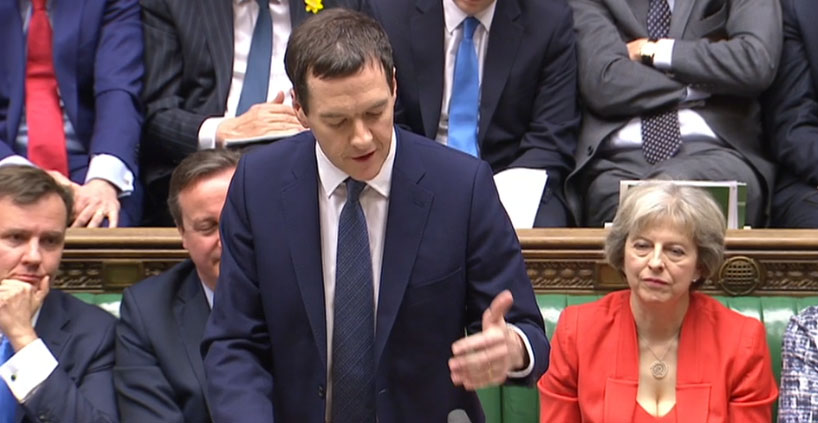 As Chancellor George Osborne is forced to revise down his forecasts for growth he is promising a “fundamental reform of the business tax system”.

Osborne delivered his eight Budget by reiterating he was focusing on long-term goals and trying to protect against a “dangerous cocktail of risk”.

There was lots of bluster, some important changes for business were announced and this time round no specific cuts were highlighted (although austerity is set to continue).

In a major shake-up of business rates Osborne is looking to clamp down on tax avoidance and save £12bn in order to offer concessions elsewhere.

There is a new threshold structure, meaning that small business rate relief will be increased from £6,000 to £15,000.

From April next year 600,000 of the smallest businesses will pay no business rates at all.

Greater London Authority will be able to retain all of the business rates it raises by April 2017 – three years earlier than planned.

Meanwhile corporation tax will be cut to 17% by April 2020 and paying National Insurance will be simplified for the self-employed.

One of the main loopholes Osborne has cracked down on is the abuse of “personal service companies.”

These were originally designed to help freelancers but have also meant, he says, that around 20,000 public sector workers are reducing their personal tax and national insurance bills by £3,500 by being paid through “personal service companies”.

While Osborne recognised that the likes of Ebay and Amazon had helped fledgling businesses reach customers, he says that there has been a rise in overseas suppliers storing goods in Britain and selling them online without paying VAT.

The Chancellor says: “That unfairly undercuts British businesses both on the internet and on the high street, and today I can announce that we are taking action to stop it. That’s the first thing we do to help our small firms.”

HMRC will be given new powers to make these overseas traders comply and make them liable for the VAT.

Osborne kicked off his speech by reiterating that his new growth figures were predicated on Britain staying within the EU.

These figures are revised down to 2% for 2016 compared with 2.4% when the Chancellor announced the Autumn Statement last year.

The Government will push on with austerity measures underscored by Osborne’s announcement that a further £3.5 billion of savings will need to be made in 2019/2020.

“One of the key changes is the extension of Entrepreneurs’ Relief to passive investors in unlisted trading companies. This gives them an entitlement to a 10% Capital Gains Tax (CGT) rate on gains up to a lifetime limit of £10m. They have to be long term investors though, which means that they must have owned the share for at least three years and have subscribed for them personally for new consideration on or after 17 March 2016.

“This provision will help companies in the sector attract equity capital especially where EIS relief is not available.

“The continuing fall in the rate of corporation tax, currently 20%, is also good news. We knew that the rate was going to be reduced to 19% and then 18%, but a rate of 17% from 2020 has now been announced. This is good news for all entrepreneurs.

“The cutting of business rates for smaller business will be of benefit to some in the sector.

“As with all budgets, not all the news is good. Companies that make loans to shareholders and certain others have to pay corporation tax at 25% of the loan amount to HMRC. This tax is repayable as and when the loan is repaid.   The purpose of this is of course to stop companies making loans rather than paying salaries or dividends. The change here arises because the rate of taxation on dividends increases by 7.5% across the board from 6 April 2016. To realign this tax ‘deterrent’ on making loans, the tax rate on these is now being increased from 25% to 32.5% for loans made on or after 6 April 2016.   It would appear that the old rate applies on loans made before that date. Making loan payments or dividend payments by the end of the current tax year is something that businesses should consider.”

Creative Industries Federation chief executive John Kampfner, says: “We welcome the fiscal measures to encourage entrepreneurship and highly innovative small businesses in our sector and the wider support for culture, including measures that should help museums and galleries around the country.

“But we are extremely concerned that local authorities will be hit by another major cut to their budgets when local arts provision is already under pressure.”

What one skill should all aspiring designers have?