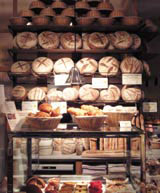 Upmarket, urban cafÃ©s, patisseries and tea rooms – either contemporary British or grandly European in style – are springing up, with the aim of introducing city dwellers to the pleasures of an afternoon cuppa. And design is at the forefront of this caffeine-fuelled revolution.

Hotels are also getting in on the act. Browns Hotel in London’s Mayfair will open a ‘quintessentially English’ tea room designed by Olga Polizzi in the autumn. And earlier this year the capital’s Waldorf Hilton opened Bar Homage, a tea room that nods ‘to the grand cafÃ©s of Europe’.

A new addition will be the Tea Palace, which opens on London’s Westbourne Grove next month with interiors by Stiff and Trevillion, branding by Saturday and a website by Poke. Within its white and purple interiors, it will serve 150 different types of tea and will offer patisseries and sandwiches served on branded, bespoke Wedgwood china.

‘We wanted opulent, decorative interiors,’ says founder Tara Calcraft. ‘They had to have character – no minimalist white walls or beige leather banquettes – but not quaint or eccentric, either,’ she says.

Saturday designed the Tea Palace identity. ‘We didn’t want to create a stuffy British tea room,’ says Saturday director Jens Grede. ‘We wanted something modern, distinguished and trendsetting. Britain is becoming proud of its cuisine again, and it’s only natural tea would make a comeback.’ Saturday created a damask-patterned identity in different tones of purple. ‘It’s a classic logotype, without being too Laura Ashley,’ he says.

For the interiors, Stiff and Trevillion used traditional tea shop doilies to make handmade wallpaper in taupe and cream – a nod to ‘quintessential coastal tearooms’ – and white muslin curtains pay homage to the material that was used as early teabags. Other materials err towards the traditional, including walnut bookcases displaying teas, leather, mother of pearl, silver, linen, suede and limestone.

Patisserie Valerie, an independent, standalone Soho stalwart since 1926, has opened a handful of cafÃ©s in London since 1991, four years after being taken over by an Italian family. But the trickle has turned into a torrent: three sites open this year in the capital, ramping up its retail presence to 11, including a cafÃ© on Piccadilly this month, a flagship in Spitalfields and a cafÃ© in Knightsbridge (DW 10 March).

Unusually for a chain, Patisserie Valerie is introducing wildly different interiors to its new branches; all are designed in-house.

The Piccadilly site, for example, which opens at the end of April, aims to attract ‘ladies on a day out to the Royal Academy of Arts’ with white marble, Corinthian columns, Venetian parquetry, bespoke furniture and tall ceilings. The Spitalfields site, in the Richard Rogers-designed Bishops Square, is quite different. It features an all-glass faÃ§ade, four levels of ceilings and sharp Wassily ‘Kandinsky-esque’ angles.

Elsewhere, Aubaine, a self-styled ‘Parisian boulangerie and patisserie’, opened in Knightsbridge in January, and Belgian stalwart Le Pain Quotidien is expanding its London offering following the success of its first UK cafÃ©, which opened on Marylebone High Street in February. Two further sites are planned for this year, according to Le Pain Quotidien managing director Philippe Le Roux.

With the interiors and identity designed in-house under the creative direction of its founder Alain Coumont, and graphics implemented by London-based Mind Design, Le Pain Quotidien offers a convivial central communal table, smaller private tables and, crucially, high quality bread. It has 55 sites across Europe and the US, and plans to open ten more this year.

‘Rustic simplicity is common to all our cafÃ©s,’ says Le Roux. Simple interiors and packaging reflect simple food, made with fine ingredients.

Like Le Pain Quotidien, Aubaine focuses on quality ingredients – it imports flour and butter from France, and its patisseries and bread are baked on-site. Aubaine founder Hani Nakkash brought in graphic designer Flo Bayley to help develop the Aubaine concept, as well as design graphics and packaging.

‘I created a sketchbook of ideas based around various themes, but the concept of freshly baked bread and patisseries emerged as the strongest,’ says Bayley. ‘So the wrapping paper for the takeaway loaves features various types of bread, presented in a “bread encyclopedia” style.’ To emphasise Aubaine’s Gallic credentials, the logo features a 2CV with a long baguette across the roof, driven by a man wearing a beret.

Bayley echoes Patisserie Valerie managing director Enzo Scalzo’s thoughts on the cafÃ©/patisserie boom. ‘Consumers are becoming more Continental, and less frugal, in their tastes,’ she says. ‘People are prepared to pay £4.50 for a great piece of cake. People can eat whatever they like, whenever they like – and that adaptability is very attractive.’