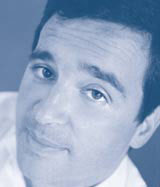 ‘Easy – it would have to be the official commemorative film, book, poster, tea towel and limited edition bone china collectibles celebrating Manchester City Football Club being crowned the Champions of Europe. That would be a dream event (a total fantasy more like). It would also be a dream brief. And if we started it now, there won’t be a crippling deadline on the job either.’

‘Just a quick search on the Internet uncovered at least 200 forthcoming dates for the end of the world, so I decided to issue a brief to Pearlfisher’s designers to create commemorative tea towels for all of them. Like Charles and Camilla’s wedding, we’re expecting the odd hiccup over dates, but nonetheless, enormous profits.’

‘I’m not one for souvenir memorabilia as it usually has little purpose other than dust collecting, or making an appearance on Antiques Roadshow 50 years after it is produced. However, given that the British public has contributed to and supported many a lavish Royal Wedding, three of which have ended in divorce, perhaps The Palace could design and issue special Royal Divorce Commemorative Coins (as legal tender) back to all of us.’

‘I personally believe the Greeks missed a trick with the tasteful merchandising they produced for the Athens Olympics last year. In the true spirit of memorabilia, they could have produced a set of typically white ceramic souvenir plates, endorsed with the official logo, and distributed them to every restaurant across Greece. That would have been the perfect fit between culture and custom.’

‘Jamie Oliver’s one-man campaign for healthy school dinners deserves a medal, at least. I think that we should certainly mark the return to healthy, nutritious food for our children.’