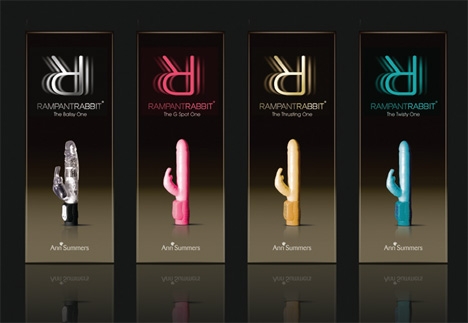 The overhaul will see Fitch creating a new retail interiors concept, which will launch alongside new packaging created by Elmwood for the range of sex toys (pictured), including Ann Summers’ iconic Rampant Rabbit range.

’We don’t sell lingerie and toys, we sell orgasms and we need to reflect that,’ says Fiona Davis, Ann Summers marketing director. She adds, ’Internally, we describe ourselves as a “business doing pleasure”, so we’ve been working with a number of partners to bring that alive across all aspects.’

Ann Summers began working with consultancy 20/20 in early 2010 to create brand guidelines on tone of voice and the brand’s visual language, following strategy work to identify the brand’s growth potential.

These guidelines initially informed internal and marketing communications, created in-house, and were later used to inform the briefings for packaging and retail design.

Fitch’s retail concept will be piloted in the Westfield Stratford shopping centre in east London, opening in September 2011. The Elmwood-designed new packaging range will launch this autumn.

Lucy Unger, Fitch managing director for Europe and Russia, says, ’Ann Summers is in the business of pleasure and instilling in the customer the confidence to make decisions on how they want to express their sexuality.’

She adds, ’It’s about bringing to life what’s unique and ownable about the brand, and what the consumer’s looking for.’

Davis says, ’It’s as close to a rebrand as you get. We’re still true to our values of being “by women, for women”, and bringing them the sexiest products in an environment that works for them, but expressing that in the visual language.’

She adds, ’It’ll be an evolution not a revolution, but we’re very excited about what we’re hoping to bring from autumn onwards.’

The first Ann Summers store opened in London’s Marble Arch in 1970. The chain now has 144 stores

The company was named after Annice Summers, the female secretary of the male founder, Kim Caborn-Waterfield. She left the company soon after it opened following a row with Waterfield