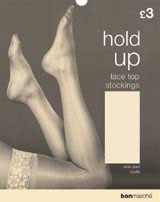 Womenswear retailer BonmarchÃ© is re-evaluating its brand from store interiors to packaging and will introduce revamped store concepts later this year, as part of moves to give the brand a ‘more youthful’ appeal.

Details on the concepts and the consultancy undertaking the work remain under wraps, but the initiative is ‘brand new for [BonmarchÃ©],’ says design and promotions manager Marc Allott.

According to Allott the new concepts will be tested across a selection of stores towards the end of this year, and will seek to reflect the brand’s change of direction.

The brand is currently aimed at women aged 45 and over.

‘We’re not trying to gain a younger audience, but we want to create a more youthful design language,’ according to Allott.

BonmarchÃ© has been modernising its stores, with design managed in-house, over the past three years. Almost all of its stores now feature more uniform ‘white box’ concepts, Allott says. New concepts will complement the existing stores, he adds.

As part of the modernisation process, BonmarchÃ© is trialling its first own-brand range of hosiery, with packaging by Storm Design (pictured). It will be launched in 100 stores in September and, if successful, will be rolled out across BonmarchÃ©’s 283-strong estate.

The company plans to introduce a similar own-brand lingerie range next summer. The design and packaging work for this range has ‘yet to be confirmed’, Allott says.

‘[The hosiery range] is a completely new thing for us. We’ve dabbled in hosiery before, but it’s the first time we have introduced a branded range with a clear identity,’ he adds.

Storm won the work in June following an unpaid credentials and strategic pitch against unnamed rivals.

The group was approached to pitch on the strength of previous store interiors work for BonmarchÃ©, according to Storm design director Mike Furniss.