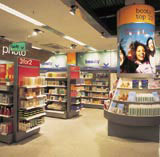 Design groups look likely to join the list of suppliers repitching for roster status at Boots the Chemists, as the retailer initiates a review of its creative agencies and awaits the arrival of new-broom chief executive Richard Baker next month.

Its incumbent ad agency JWT is being asked to repitch at the end of this month, leading to speculation that Boots’ preferential agreement with WPP Group faces the axe.

Boots has also confirmed its ‘retail creative and media planning and buying relationships’ are being considered, ‘as part of our on-going brand and marketing development work’.

A company spokesman says he is keen ‘not to set hares running’, but it is not clear whether the design roster is included in the terms of the review at present. Boots will be ‘taking a holistic view’, he adds.

Boots director of strategic marketing and development Anne Francke is leading the review, with input from head of design Jon Turner.

Turner has kept a low profile since joining Boots last year. Many designers expected him to bring greater consumer-focus and emotional resonance to Boots’ design output (DW 12 December 2002). But the company has spent much of this year continuing to refine its ‘basics’ offer, jettisoning its Wellbeing brand and putting the Pure Beauty spin-off on hold.

The retailer is wary of going into detail about its strategic plans before Baker joins on 15 September. But, given his previous job at Asda, Baker is likely to compete on price in many areas.

Outgoing chairman and acting chief executive John McGrath has predicted Baker will be ‘utterly obsessed with footfall’. And Sir Nigel Rudd, who takes over as chairman next month, has said that ‘visiting Boots will become a more exciting experience’, adding ‘it has to be fun.’

Enhancing store design is likely to remain a priority and a rolling programme of store refits and openings is already underway, with 300 planned for this year.

Traditionally, Boots has worked with independent consultancies like Dew Gibbons and Davies Hall on packaging design, while 20/20 created its most recent interiors concept, an experimental ‘convenience’ store in London’s Holborn.

Boots shares rose last month after improved first quarter trading but the City and designers alike will be marking time this August until Baker takes up the reins and his strategy emerges.

What should Richard Baker’s top priority be?

‘It would be very tempting to throw the baby out with the bath water, but the first thing we would advise [Baker] to do is rebuild belief in the business internally. Also, Boots has neglected its core pharmaceutical and chemist business so should [work to] position itself as the UK’s expert, trusted pharmacist.’

‘Boots’ priority must be to respond to changing retail and consumer trends by adapting its store portfolio. [It should try] three different types of stores – a grab and go format to satisfy needs-driven purchases; developing the health side – Boots the Chemists; and using large stores to provide the full range and the premium products.’