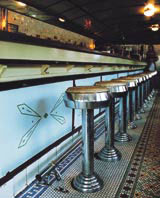 Heatwaves in the city generally call for basking in the sun, paddling in lido pools and licking ice creams. For those stuck in the office, trawling through travel guides is a good consolation prize.

More functional than illustrative is Archi-trek, a series of guides to architecture in the North West of England, aimed I suspect, at that mixed breed of architecture buffs and keen walkers. The brainchild of artist Clare Negus, photographer Joel Chester Fildes and designer Henry Wong, the guides are designed as leaflets, and have stickers with photos, views and vistas that can be paired up to key buildings on the route so each reader creates a customised memento of the trek.

So far the Archi-trek series has covered Merseyside, Greater Manchester and Knutsford and Tatton in Cheshire. The Merseyside trail includes Liverpool and Birkenhead’s waterside architecture exploring the dock areas, the Queensway Mersey Tunnel and Hamilton Square, the largest Georgian Square in the UK. Manchester covers all those buildings

that have shot up in recent years like Urbis, the Manchester Art Gallery, The Lowry and the Imperial War Museum North. The Knutsford and Tatton guide includes Joseph Paxton’s Fernery & Showhouse as well as the new library by Morten Lindholf of Pickard Finlason Partnership.

For those looking afield, the Hip Hotels series churns out yet another gem in aspirational holidaying: Hip Hotels USA. For this tome, Herbert Ypma has collected an eclectic choice of hotels that reflects the diversity of each state of the Union. A Spanish-style haÃ§ienda in Arizona appears elegant yet rustic with its terracotta hues, Mexican blankets and Frida Kahlo-inspired murals. In New Hampshire, the Shaker’s Inn is a rather severe-looking retreat featuring the trademark minimalist cherry wood furniture produced by the separatist religious sect. There are also some over-the-top choices like the Viceroy and Maison 140 in Los Angeles, whose interiors reflect the ‘dark, busy and complex’ style apparently now very popular in California; a sort of maximalist reaction to those understated white box interiors so popular in the 1990s. However, my favourite hotels are in the Palm Springs section, home to the work of many American Modernist architects and designers like Raymond Loewy, Richard Neutra, Rudolf Schindler and Albert Frey. You’ll probably recognise the Orbit Inn and the Hideway, having featured heavily in the past as backdrops to glossy fashion shoots.

Continuing on the American theme is the new Style City New York guide. Like the two previous books, London and Paris, the guide is designed by the Senate and Grade Design and features a well-balanced assortment of photography and text that manages to be both informative, eye catching and reflect the dizzy pace of the city. Short introductions describe the gentrification of fashionable areas like the Meatpacking district, although it fails to mention Stella McCartney and Alexander McQueen’s new stores or, indeed, Soho House, arguably (British) design landmarks that have helped put the neighbourhood on the map. Yet since the shops, restaurants, museums, galleries and hotels showcased are a result of an edited selection supposed to stand the test of time, perhaps the contributors decided to play safe. As Le Corbusier’s quote in the introduction reminds us, ‘New York is not a completed city, it is a city in the process of becoming.’ So what better excuse than that to visit.

Archi-trek is available at tourist centres – visit www.archi-trek.com. Hip Hotels USA by Herbert Ypma is published by Thames & Hudson on 26 August and priced at £18.95 while Style City New York is out on 27 September, priced £14.95