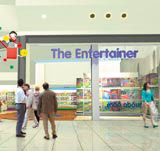 Dalziel & Pow has created a flagship store for toy retailer The Entertainer, opening next month at the Birmingham Bullring, as well as revamping the brand’s equally large Kingston outlet, due to reopen in October.

The company has committed itself to increasing its 34-strong estate to 60 stores by 2007. Design ideas that prove successful in the ‘concept stores’ will filter through to other outlets, he adds.

According to Eldridge, the group’s brief was to develop exhibition-style design in a retail context – to create a more ‘theatrical’ effect and encourage browsing.

Dalziel & Pow designer Richard Bennett, who worked with director Alastair Kean, says, ‘We want to give people that extra experience.’

Based around eight themed zones, the Bullring store features a ‘children’s entrance’ that takes the form of a ‘snake slide’ – children climb into the creature’s mouth and slide down its body into the store.

Audio-visual elements will help to make each of the stores into ‘destinations’ in their own right, Bennett adds.

Given the fact that around 70 per cent of The Entertainer’s sales come in the three months before Christmas, its stores are ‘theoretically an exhibit for most of the year,’ Eldridge adds.