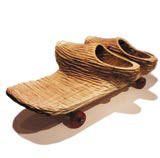 Of all the design disciplines, product design is perhaps the toughest on new graduates. With so few jobs going in what amount to relatively small consultancies, it’s not easy to enter the industry by that route. For most, the kick-off point is a tiny designer/maker business, which takes a lot of nerve and a modicum of business sense that doesn’t always come with the academic qualifications.

But three designers from the class of 2002, British designers Natasha Chetiyawardana and Will Carey and Dutchman Stijn Ossevoort, have found a different way to do things.

For a start, they work collaboratively rather than as a consultancy. Chetiyawardana works freelance, mainly between London and New York with designers such as Karim Rashid and Desgrippes GobÃ©, her links with the US having come through a student placement at New York’s Pratt Institute. Carey, meanwhile, works with Universal Design Studio, the interiors off-shoot of London furniture design group Barber Osgerby. Having worked with the likes of Ron Arad and Prada, electronics buff Ossevoort is a design researcher at Zurich University in Switzerland, working on wearable electronics.

Second, they don’t limit themselves to product design. Their first client project was packaging for Vitacress’s fresh salad ranges and they claim interactive design, graphics and branding among their areas of expertise. This breadth was borne out on their stand at One Year On at London’s Business Design Centre in June, which, while all around remained plain, was bedecked with wallpaper bearing sketches of their work. ‘It’s a really diverse mixture,’ says Carey. ‘But it’s all spatial.’

Their third point of difference is that they initiate their own collaborative projects, each with its own identity. The Seen the Light project, for example, comprising four ‘intelligent’ lighting ideas, won the £1000 One Year On Award for combining innovation and sound business sense. Though they are looking to bring the Memo lamp from Seen the Light to market and are approaching Nesta and the Audi Foundation for funding, they don’t particularly see themselves as concentrating on lighting design.

‘We wanted to show our thought processes, says Carey of the initiative. ‘Working individually is about subjectivity,’ says Chetiyawardana, ‘and this is about ideas.’

This proactive approach carries through to their marketing. They were at One Year On this year because the stand was part of the prize awarded to Chetiyawardana when she became a Business Design Centre New Designer of the Year, winning £2500 at New Designers in 2002. But they have also shown their work at events in New York, Tokyo, Frankfurt and at this year’s Milan Furniture Fair as part of the Satellite showcase of younger design talents.

And the work they have shown is very varied. At Frankfurt’s Tendence fair, for example, Chetiyawardana showed the Chocolatea project that had won her the New Designers prize, while Carey exhibited an interactive piece. Meanwhile, at Tokyo Designers Block they showed a client project involving branding and packs based on traditional ‘Englishness’.

The trio met when Chetiyawardana and Carey were studying product design at London’s Central St Martins College of Art and Design. Ossevoort, then studying at the Royal College of Art, was one of their lecturers. Since graduating they have worked from the Chelsea studio of Terry Stratton, Chetiyawardana and Carey’s former tutor at Central St Martins and a founder of Stratton Windett, while Ossevoort also has a ‘kitchen studio’ for his electronics.

Nor has Stratton’s support been their only break. Rapid prototyping and manufacturing company General Pattern UK made the prototype of the Memo lamp, did the injection-moulding and even lent them the company’s BMW. It has now invested in tooling for Memo. University of Wales Institute in Cardiff has, meanwhile, allowed them to make the mould at the college.

And they haven’t been short of interest in Seen the Light. A hotel group, a UK contemporary furniture retailer and a big-name lamp manufacturer all expressed strong interest at One Year On, while FutureLab is keen to use the Still Life interactive lighting piece ‘to stimulate children with movement limitations’.

Though the proactive collaborations are key to their philosophy, the trio want to work more with clients, due to the interaction involved. ‘People make you think in different ways,’ says Carey.

Chetiyawardana, Carey and Ossevoort look set to see the light well into the future, whether separately or together. But Chetiyawardana insists the collaboration will continue regardless: ‘We’ll always keep our brains connected wherever in the world we are as individuals.’