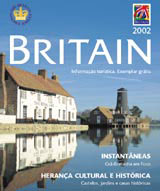 DCG has redesigned the British Tourist Authority’s guide to Britain, which is aimed primarily at overseas visitors. It now features a cleaner template, which is simpler to use and incorporates the BTA branding more prominently, says DCG creative director Andrea Rumsey. The Britain Guide is printed in 17 languages and the redesign had to take this into account. It features UK landmarks and lists forthcoming events including the Commonwealth Games in Manchester.