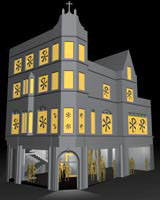 A knotted rope chair, your grandmother’s crochet transformed into a rigid table, a porcelain vase moulded from a condom stuffed with eggs, and another vase computer-generated from a glob of snot; all are the products of one extraordinary design talent. What connects the diverse – and prolific – output of Dutch designer Marcel Wanders is a fascination with materials and technologies, imbued with a deep humanism. His products are instantly recognisable essays and musings about what is possible and appropriate to do in design. Little wonder that Wanders is fast becoming one of the most fÃªted international designers around.

He works in his Amsterdam design studio with six designers on numerous projects for companies that include Magis, Cappellini, Flos, Mandarina Duck and Droog Design. This is a veritable role-call of the most prestigious design brands of today. If that was not enough for a designer who is still only 38 years old, the studio is also home to Moooi, meaning ‘beautiful’ in Dutch with an extra ‘o’ to make it extra-beautiful. Moooi is Wanders’ own business, mostly producing his own designs, and was launched at the 2001 Milan Furniture Fair. The Amsterdam studio is also the base of Vissers Furniture for which Wanders is art director.

Wanders trained in art and design in Dutch and Belgian colleges and graduated from the Hogeschool voor de Kunsten, Arnhem, in 1988. Aside from a brief spell as a product designer with Landmark Design in Rotterdam (from 1990 to 1992) he has always remained an independent designer. Like many young designers, Wanders teaches and in both 2000 and 2001 was a project leader on the prestigious Vitra Summer School in France. Unusually, Wanders appears to combine the skills of design excellence with business and organisation e e acumen, and a great sense of personal direction in his work. The last decade has been a period of expansion and consolidation for him, and perhaps it comes as no surprise to discover that this high-achiever has found time, in between designing the future-classics of 1990s design, to qualify as a Reiki practitioner. Aside from founding groups (Wanders Wonders in 1995, Moooi in 2001), he even composed the music for the 1999 Droog exhibition in Milan (with Ton Driessens).

For many he is known as a furniture designer, due to the fame of his Knotted Chair that first appeared in Droog collection in 1996, part of the Dry-Tech project. The following year production was taken over by Cappellini.

Born out of a collaboration with the Aviation and Space laboratory of Delft University of Technology, the chair is constructed from aramid rope twisted around a carbon core, then hand-knotted into the form of a chair. Impregnated with epoxy it is literally ‘hung-up to dry’ and gravity creates the final form. The chair is reminiscent of fishermen’s nets and Wanders’ ingenuity has been to take an age-old technique and subvert it for a contemporary purpose.

In many ways it is the perfect combination of craft and industry, the result of a humanistic, tactile approach to materials. What should be flexible and soft is rendered stiff and structural, forcing us to question our preconceptions. What is more, it rehabilitates the reputation of macramÃ© that since the 1960s has been seen as decidedly unhip. Not that the vagaries of fashion seem to interest Wanders. Cappellini has experimented with a chromed version of the chair, but much of the charm of the rope original is lost. In 2001 Wanders extended the concept with Cappellini to produce the Fishnet Chair. Unlike the Knotted Chair, the intention is to weave the net of this chair by machine.

Working with Rosenthal in 1997 Wanders considered challenging ways of using traditional materials in new and surprising ways. Taking one of the oldest industrial techniques known to man – the manufacture of ceramic – Wanders combined it with a natural material much imitated by man – a sea sponge. Once immersed in liquid clay, the sponge is fired in a kiln. The sponge is entirely burnt away leaving a porcelain simulacrum of itself of incredible delicacy. Like Gaetano Pesce before him, who has spent many years exploring the tension between mass-production techniques and unique objects, Wanders’ sponge vases are individual yet can be industrially produced. And like fellow Dutch designer Hella Jongerius, Wanders celebrates the arbitrary flaws and foibles that can appear in mass-produced objects. For example, Wanders made copies of a 3100-year-old Ming vase, now in production by Moooi, in which both the marks of the original Chinese potter and the modern manufacturing process are evident.

The longevity of objects and materials has been a resonant theme for Dutch design in recent years and has informed many of the designers associated with Droog. In fact, it is fair to say that this quest has been the driving force of the ‘dry’ aesthetic they have so successfully promoted. They design objects so concerned with expressing their process of manufacture they are almost beyond style and fashion. Simplicity is one key to the longevity of Wanders’ objects, and he wants us to love them for it. He wants to design ‘objects that touch you and that generate a positive feeling’. In short, according to his 1999 book, Wanders Wonders, ‘products worth bonding with for a lifetime’. If a lampshade is the key formal element of a lamp, why not make a tower of shades and eliminate the lamp’s structure completely, asks Wanders (Set of Shades, 1988, by DMD). Or if you want a bigger lamp, make an outsize shade (Big Shadow, 1998, Cappellini).

Industrial and craft materials, processes and techniques have been central to Wanders’ designs, but recently he has explored the potential of computers to aid design, and also of rapid prototyping technologies as manufacturing processes in their own right. In this he is similar to Ron Arad, yet Wanders’ results have been more organic, and less geometrically derived than Arad’s Bouncing vases. His Airborne Snotty Vases were shown with Cappellini in 2001.

The collection comprises five models, each of which is named after, and derives from, a particular nasal condition (Influenza, Sinus, Pollinus and so on). A sufferer was asked to sneeze into a 3D scanner that recorded the exact form of the expelled mucus. Magnified one hundred times, and hollowed at a prescribed point to create a vessel, each resulting computerised design was produced by stereolithography, a method of building a three-dimensional object from layers of bone-like resin. And the results are peculiarly skeletal. The forms would be impossible to create in porcelain or glass, and the unpleasantness of the method is negated by the beauty of the result.

Not content with only designing objects, Wanders’ studio has turned its hand to interiors and completed the VIP room of the Dutch Pavilion at the Hanover World Expo in 2000. The floor, like an ice-rink, reflected the domed ceiling constructed of silver twigs interspersed with tinkling wine glasses, backlit by an ever-changing lighting system to simulate daylight falling through this artificial woodland grove. Within the room 44 individual chairs (now made by Moooi) seemed to skate across the floor on their dancers’ flared trousers hiding the wheels.

Undoubtedly, a great sense of poetry imbues all Wanders’ work, whether it is interiors, furniture or objects. At the Milan Furniture Fair in 2002, Wanders is presenting no less than 21 new designs, which you will be able to see at the Victoria & Albert Museum exhibition Milan in a Van. The projects run the gamut from mass-produced plastics to prototypes, editions and experiments. It is a credit to the versatility and creativity of Wanders that his imprimatur is sought by so many design-led companies.

And the future? One thing is certain: we will be seeing a great deal more of Wanders’ unique talent in the UK. His profile here has been relatively low-key to date, but the extraordinary Mandarina Duck store he is planning in London’s Conduit Street, due to open in April, will shortly change that. And with products and projects about to appear with Amsterdam’s Cor Unem, Cappellini, Magis, DMD, Goods, Flos, Moooi and, of course, a continuing relationship with Droog Design, the noughties will be the decade to wonder at Wanders.

Wanders should be an inspiration for the new generation of furniture and product designers, not to mention those manufacturers with wit enough to work with designers. Few designers are as adept and as poetic as him. Rejecting what he describes as a ‘baby-face fixation’ with fashionability, Wanders’ designs are here for the long-haul. He designs objects with character and personality – objects that reward contemplation and are the result of intelligence and prolonged research.