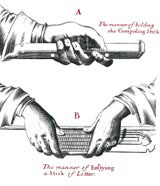 Those who do not know their history are doomed to repeat it, says the old adage.

Given the importance of creativity and originality in design, it is surprising that the industry seems to take a lackadaisical attitude towards preserving its history.

Only last October The Museum of Advertising and Packaging in Gloucester closed its doors for the last time in 17 years, despite the best efforts of individual designers to secure funding for its future.

The Type Museum Trust must be hoping that the fund-raising campaign it kicked off last week is rather more successful (DW 7 February). The museum is a specialist typography archive in south London tracing 500 years of print history. Jasper Jacob Associates has created design concepts for Marks Barfield Architects’ masterplan to turn its vast archives into a living museum and public exhibition space.

However, it is not the first time it has tried to become a ‘proper’ museum, as a similar plan was put forward as far back as 1994.

The success of the museum’s efforts must surely depend on the attitude of the design industry towards preserving its heritage. ‘Design history as a subject has come in and out of fashion since the 1970s,’ says Guy Baxter, archivist at the Victoria & Albert Museum’s archive of art and design.

It is not particularly in vogue at the moment, despite underand postgraduate courses dressing up the subject as ‘contextual studies’ or ‘cultural history’ to make it more appealing, he says.

The V&A’s art and design archive mirrors the museum’s actual collections with ‘less breadth, but more depth’, Baxter says. It houses a collection of 20th and 21st century design, from stained glass, ceramics, fashion and textiles to graphic and exhibition design. For example, it features the archives of Habitat and Heal’s as well as the personal archives of influential designers such as Robin Day, Misha Black and Milner Gray.

But it is the halls of the V&A itself that are more likely to be packed with students carrying sketch and notebooks. ‘It is a rich source of inspiration,’ says Big Idea creative director Bill Wallsgrove, who campaigned against the closure of The Museum of Advertising and Packaging.

Collections such as this are essential to stimulate working designers, he says.

‘Understanding why a designer has used a certain typeface or colour by studying [his or her] work first-hand gives you much greater authority on a particular subject,’ Wallsgrove says.

But archives must be put into contemporary context or their importance will be lost on people, says The Type Museum director Piers Rodgers. ‘Beautiful objects from the past are important, but they must be reinterpreted for the present and have their relevance explained,’ he says.

‘[The Type Museum] is trying to shake the perception that it is housing obsolete technology that only incurable romantics are interested in,’ he adds.

Wallsgrove suggests branding and marketing an archive is vital to attract visitors. ‘If an archive is tucked away, it is important to treat it as a public rather than private collection and brand it as one,’ he says.

The Type Museum has set out to create an identity and employed the services of renowned typographer Eiichi Kono to create its marque.

The logo clarifies the museum’s offering for visitors, but it serves an even greater purpose, Rodgers says. ‘It helps us to understand what we stand for,’ he explains.

A lot of museums display printing machines, but that misses the point, he says. Typography is a more important issue and is as relevant to designers today, whether in print or on-screen, as ever, he says ‘and that is our essence’.

Some would argue that a museum serves the same purpose as an archive, but a museum’s collection is subject to the whim of its curator. Work selected for display in a museum is, clearly, not exhaustive. The trouble with a collection is that you don’t know what is missing from it and what else is around, a Design Museum spokeswoman says.

In the same way, a book about a design subject is limited by what the publisher and author deems interesting, argues Wallsgrove.

The Design Museum used to have a larger permanent collection, but the museum changed its policy last year and started increasing its temporary exhibitions instead, unearthing collections for short-term display.

‘We wanted the work on display to be less static,’ the spokeswoman says. ‘Temporary exhibitions are more appealing: some of our permanent displays had not changed for ten years.’

It is vital that students, particularly of 3D forms of design, such as furniture and product design, are able to see and touch the work. That way, they can better examine the detail, thought processes and dimensions, she adds.

Temporary exhibitions such as the V&A’s Brand.New show in 2000 are an excellent way of getting a wide audience into a niche subject, such as graphic identity design, Wallsgrove points out.

‘It is a shame there is nothing like [Brand.New] on a permanent basis,’ he says.

Students are the most frequent visitors, Whitworth says. Working designers are less of a target group. ‘It could be that they work for the present and are less interested in the past. Or they may just be really busy,’ she adds.

The day job – and the deadlines that come with it – inevitably gets in the way of reflection and contemplation, but designers might find that time invested in understanding their past pays creative dividends in the future.