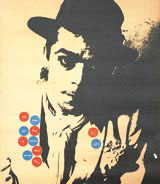 Sure, it’s a mixed bag, and the rawness of some of the work is unsettling. The rectangular formats jar with the sleeve-shaped iconography burned into our collective musical memories. But some are simply lost classics, like the design for Ian Dury’s New Boots & Panties, with its lithographic portrait plastered with stickers.

One poster shows two turntables on a poster for the first time, perhaps the graphic beginning of a now omnipresent Hip-Hop culture. Two others show Adam Ant morph from bondaged punk to white-striped New Romantic. You can almost feel the switch from the grubby pages of Melody Maker to the MTV generation, as graphic designers pulled Pioneers of Modern Typography down from the shelf and started to make names for themselves. But as the music video became the prime tool for selling records, the poster’s time had gone. It seems that The Buggles were wrong – video killed the poster designer, not the radio star. It’s a shame.

Suffragette Cities is on until 12 August at the Pentagram Gallery, 11 Needham Road, London W11

Greeves to join Smith at FutureBrand