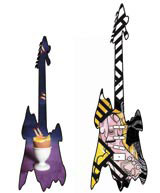 What happens when you take a whizz-bang new gadget, a respected denizen of the design scene, a cutting-edge magazine, a multinational electronics giant and ten bright young things from the worlds of illustration, textile design, ceramics, film-making and graphic design? CutOut is the result, an interactive public art happening that involves giving away original pieces of art on the streets of London.

And for why? CutOut coincides with the European launch of Sony’s new PlayStation Portable, a sort of grown-up Game Boy. With it you can play games, music and video on the move, thanks to a new high-capacity optical disc Sony has developed, which they’ve named the Universal Media Disc. Of course, the geeks among you will already know this, as the PSP has been available in the US and Asia for some time. It’s just the PAL-compatible territories that had to wait.

Looking to create a fuss over the launch of its new device, Sony Computer Entertainment Europe has teamed up with Marmalade (that’s the genre-defying omni-creative magazine), Peter Saville and a bunch of talented individuals, including creator of surreal knitted beings Donna Wilson, painter of monsters and mayhem Phil Ashcroft, photographer of extraordinary still lives Annie Collinge and ‘digital ceramicist’ Geoffrey Mann.

Highlighting the interactive and portable nature of the PSP, CutOut is all about getting art into the public arena, with the added excitement that if you happen to be hanging around central London, ‘from Old Street to Portobello’ (naturally), between 21 and 31 July, you might just stumble across a 6ft-tall guitar-shaped cut-out thingy. If you’re the first to grab it, it’s yours. There are 500 of the Peter Saville-designed guitars, 50 signed by the man himself, and a further 20 that have been customised by ten handpicked talents. If you’re not so eagle-eyed, but still want to check out the work, one of each pair will be on show at Oki-Ni, the Mayfair shop that specialises in limited-edition co-productions with such trendy brands as Evisu, Fake London Genius and Eley Kishimoto.

How did the PSP CutOut project come to life? Sasha Spence Trace, art director and co-founder of Marmalade, says, ‘We wanted to take art and design into the streets and make it more democratic, because galleries are so alienating. We also wanted to show that a good idea could be fun. You find the art, you steal it, you keep it! So we brought the idea to PSP; the people at Sony got it straight away because they’re committed to supporting new talent, and so are we.’

With its collaged spreads and anti-style-mag attitude, Marmalade showcases new talent alongside big names, with art students sharing the page with international stars. It was Marmalade’s idea to invite Saville on board. Spence Trace says, ‘We’ve been wanting to work with Peter… he’s the greatest designer we’ve got.’

Saville credits his assistant Sam Roberts for recognising the potential of Marmalade’s request and suggesting that he take a closer look. ‘We get a lot of enquiries that are out of left-field,’ Saville explains, ‘and nine out of ten never happen. But it is an interesting idea that something be left on the street, as an awareness-raising campaign. If there’s something interesting about a project, I’ll do it.’

With minimal branding and the possibility for customisation, it was up to Saville to design ‘the thing’.

‘We were told, do what you want; we had to tick certain boxes, but it was also up to us to say which,’ Saville explains. After a process likened to searching for ‘a needle in a haystack’, he identified, ‘the one definitive icon of electronic pop culture – the electric guitar’. Saville adds, ‘Not only is it universally recognised, but it’s pluralist too; whether you’re The Beatles, Bob Marley or Chuck Berry, it’s all about guitars.’ The interactive aspect comes from the fact that even a cut-out guitar is irresistible, ‘you want to pick it up and have a go’.

Abstracted from the Fender Stratocaster silhouette, ‘as if painted with a spray-can’, the cut-outs are a versatile ‘canvas’ for customisation. Knitter of mutant toys, Wilson describes her version as ‘a creature born to a family of travelling guitars who married their daughter off to a jumper’; while Ashcroft, a painter inspired by comic books and sci-fi, has taken this opportunity to bring his signature imagery of mythical monsters and Japanese landscapes to a wider audience, plus he ‘added stripes and colour-ways that reference 1970s retro-rock album covers’.

Refreshing as it is to see a strong idea brought to life through the support and resources of a big corporate brand, it only works if everyone involved receives a fair return for their time, effort and talent; positive perception only comes from doing the right thing. Outside the industry though, in the eyes of the public, a project like this, which is curated on the ‘pot-luck’ principle of, ‘go ahead and do your own thing’, is only as good as the objects produced. To make a fair judgement those objects need to be seen in all their giant-sized glory; so go hunt down an icon.

The Olympics must put design at centre stage