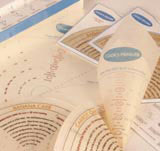 Goldsmiths College product design student Mary Rose Cook has been named as a Business Design Centre New Designer of the Year at this year’s New Designers student showcase in London.

She takes home £2000, along with public relations, accountancy and legal advice after winning one of the two main prizes of the New Designers show. Shan Valla of Buckingham Chilterns University was also named Designer of the Year for her cast-glass works.

Cook’s winning design (pictured), named Cooks Measure, is an innovative system for measuring cooking ingredients without the need for scales or jugs. It uses folding paper and plastic marked with volume measurements and recipes.

Runner-up is Jonathan Watson, a graphics student at Teeside University, who takes £500 for his designs to encourage greater use of parks, undertaken as part of a Cabe Space competition. Watson also won the Hallmark Cards Award at the New Designers show, picking up an additional £2000 in prize money.

New Designers is an annual event recognising the best graduate design work in areas such as graphics, interactive media, illustration, product, furniture, ceramics, jewellery and textiles. There were 37 awards given in this year’s show, which closed on Sunday.

Landor reshuffle ushers in the next generation of heads