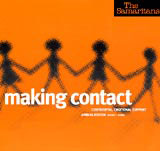 The Samaritans will unveil its first work by Autumn Design Consultants in early July, with the launch of the charity’s 2001 annual review.

The review is designed to continue to reposition The Samaritans as contemporary and relevant, says a spokesman for the charity.

Autumn partner Steve Harvey says, “The brief was to challenge people’s perception of The Samaritans and emphasise that it is not just there for people who want to kill themselves, which is why it is called Making Contact.”