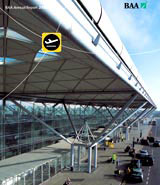 British Airports Authority has unveiled a unifying look and feel for all its corporate communications, created by Fishburn Hedges, that will be rolled out across airports around the UK.

The consultancy has designed an annual report and annual review, which were published last Friday, and which are the first manifestations of a graphic language that will eventually be applied across all BAA media.

The guidelines will be adopted by other organisations within BAA, which includes Heathrow and Gatwick airports, and applied across their corporate communications.

“It’s something that we are looking to roll out across the group gradually, but it will take time. BAA and each of its subsidiary businesses, such as the airports and BAA Retail, have their own needs and principles that need to be satisfied. However, some autonomous subsidiaries, such as Heathrow Express, are unlikely to be affected,” according to a BAA spokeswoman.

The guidelines have been designed to create a unifying look, to symbolise and define BAA’s role within the aviation industry, and, in the long term, to save BAA money through implementation, according to Fishburn Hedges head of design Chris North.

The consultancy will also design a company profile, to be published within the next two months.