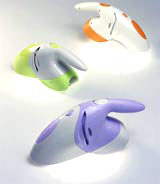 Early next month Black & Decker will launch a Compact Dustbuster, designed in-house at its European design centre near Durham.

The Compact represents the first line extension to the Dustbuster range. The design of the latest hand-held vacuum cleaner marks a “significant departure” from previous styles, according to senior designer Mark Stratford.

The model features dual filtration, claimed by Stratford to be a first for a hand-held machine. It includes improved tool storage, dirt handling and a smaller unit.

The Compact Dustbuster is more attractive, with increased colour combinations, “crisp arcs” and an improved handle, Stratford adds. “We felt there was a large group of potential consumers who wanted something contemporary and stylish that they could leave out on display and not hide away,” he says.

The product will be launched across Europe in July.

Black & Decker redesigned the Dustbuster last year, with designs created over an 11-month period, for the fourth time since its launch in 1979.