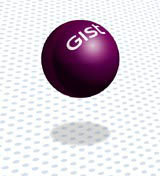 Corporate Edge has rebranded logistics and distribution company BOC Distribution Services, creating a name and identity and redesigning its website. The new image launches this week.

The company, now called Gist, is establishing itself as a distinct brand from its parent British Oxygen Company, says Corporate Edge project director David Riddle, but it remains part of BOC.

“The client wanted a higher profile and to communicate what it is all about. We created a name that was simple and direct. Gist creates solutions based around the heart of how an organisation works. Gist is also at the centre of the word logistics,” says Riddle.

The identity gives the impression of motion. Corporate Edge has designed six variations that feature the company name in different positions across the sphere.

“The idea is that if you apply different variations of the logo to different applications, such as a letterhead or a compliment slip, it suggests movement, a company in motion,” explains Riddle.

The consultancy won the work via a three-way credentials pitch.