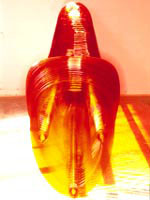 We’ve grown used to design prizes promoting excellence within the work of a designer. Their choices often come as no surprise to design pundits, as they usually either seek to confirm already established talent or tend to reward young designers whose star has already been on the rise for some while.

This is especially true for work at a prototype stage and for small designer-maker outfits, for which a healthy cash injection means that extra step towards production and distribution. Added to this, the prize brings immediate public recognition. “It definitely helps in terms of PR and publicity,” asserts Alison Pinner, director of the Oxo Tower Wharf, which, in partnership with Peugeot, promotes the prize.

“It made a difference for Hector Serrano (2000 winner), who was still a Royal College of Art student,” she says. Today, Serrano is working with the likes of Droog Design, while the previous year’s winner, Glasgow-based One Foot Taller, has become a fixture of the Scottish design scene.

Selected by a panel, which includes Wayne Hemingway, Hugh Pearman and Crafts Council director of exhibitions Louise Taylor, the 2001 award scheme has received over 500 entries.

Now in its third year, it has become a “grown-up design prize”, perhaps explaining why it attracts entries from established furniture design groups such as Barber Osgerby Associates, the Azumis and Pearson Lloyd, who, you would hope, don’t need the extra cash endorsement to continue their business. But then the prize wants to equally promote the student and the media-fÃªted designer as long as their product has been manufactured in the preceding 12 months.

Among the finalists of each of the categories, which include domestic metalware and silversmithing, ceramics and glass, furniture, lighting and textiles, are some delightful surprises. In the lighting category, Tord Boontje’s Wednesday light stands out, an intricately photo-etched stainless steel light, which is simultaneously decorative and weightless-looking. Mathias Bengtsson’s dramatic Slice chaise longue, is a laser-cut acrylic affair that is so sharp it may only be used by those of us with padded trousers – and seems more valid as a sculpture than as a handy seat.

However, according to the jurors, this year’s prize has been chosen with an eye to “functionality” rather than just great looks. Many of those have the added complexity of a dual functionality, such as the Eddy Mundy Light sweep, a broom that lights the way for nocturnal sweepers and TRI by Paul Godden, a bollard that allows for bike locking.

My personal prize would go to Inflate’s Snoozy Bed – seen both at London’s 100% Design show and the Milan Furniture Fair, and nominated in last month’s British Design & Art Direction product categories. The bed is a five-part modular system made out of polyethylene, which can be taken apart, stacked away and transported easily. It looks great and it feels comfortable, a true marriage of form and function.