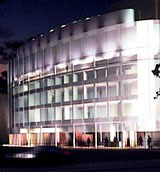 You’ve heard of the Emperor’s new clothes. Now we have the Queen’s new building.

If you think you’ve seen shots of the Royal College of Art’s new £22m oval glass tardis on the Albert Hall side of the site, you’re wrong.

Though the edifice, currently dubbed The Ellipse, has already tempted the architectural critics into print, according to its architect Nicholas Grimshaw, his team hasn’t started designing the building.

The volumes and use have been agreed for the purposes of planning permission – including a vast column-free underground gallery. But, the design of the building has yet to be considered.

So there’s no building, just a slick computer rendition of what might be. With the funding not yet in place, the RCA is. for now, living in a virtual world.