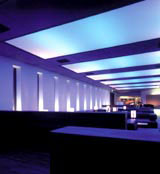 The people behind Ottos Dining Lounge are Scandinavian, and it shows – in a positive way. It’s a very architectural space, the interior is carefully designed and controlled and a cool sophistication pervades throughout. The club is located in the residential Maida Vale district of London, but ‘it is of a type more usually found in central city districts’, says Mike Stiff of Stiff & Trevillion. The club combines a bar and restaurant in a nightclub setting and forms a single space organised in four overlapping areas.

Originally designed in the 1960s as a communal facility for the flats above, the long 600m2 space sits above a parade of shops. At one end, there was a roof garden and permission had already been granted for a conservatory extension. The sequence of spaces begins with a ground-floor entrance that leads via a spinewall stair to the lobby space on the first floor. The narrow entrance makes the contrast of the volume above all the more striking.

The lobby is the central space in the sequence of four. It sits, overlooks and overhangs the glazed dining room which is four steps lower. In the other direction, it provides calm zones at the edge of the bar proper. The bar extends for 17m and is a carefully choreographed arrangement of furniture, lighting and materials. The lighting design by Minds Eye features a series of back-lit, colour-changing ceiling panels with localised lighting to the seating area using simple table luminaires. The stone bar front is washed by a concealed fluorescent details, with glazed linear light strips accenting spirits behind the bar. The bar top itself contains a flush-mounted light strip, lighting drinks from below using colour-changing fibreoptics.

Clusters of black leather chairs and sofas are arranged alongside the original vertical slit windows. The bar is travertine marble-faced and has a backdrop of angled mirrors that break up the views of the room, extending its horizons. The floor, in Iroko strip, and ceiling in 1200 square, teak ceiling panels, provide a platform for the leather furniture and lightboxes that highlight the architecture.

The final space is a raised VIP area with a low, horizontal window cut into the wall.

‘This not only provides a controlled view of the outside world, it acts as a counterpoint to the row of vertical windows that run the length of the room,’ says Stiff.