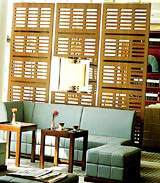 The good looks of the bar in The Lowry came about despite, rather than because of, the architecture of the new-build five-star hotel in Salford, Manchester, which opened in April. Design consultancy David Collins had to tackle a non-symmetrical space, made up of both curves and cubes, in which most of the building work and services were already complete. ‘Our brief was for something modern, open and simple,’ says David Collins project manager Panudda Foers. ‘But when we looked at the space, it was clear that wasn’t going to happen and it was difficult enough fitting a bar that could function.’

Budget was an issue, but this was dealt with by ingenuity and concentrating money on details that would make a difference. All the joinery, furniture and light fittings were custom designed. ‘If you detail things carefully and think about materials, it’s possible to create something glamorous that doesn’t cost a fortune,’ says Foers.

For instance, curved screens were constructed from perforated plywood and then veneered with laminated parchment. Simple parchment-shaded lamps were incorporated into the screens to accentuate the curve and create a vista. Foers designed the parchment feature lighting and specified downlights in the ceiling, with technical help from lighting consultant Drake & Scull

The parchment finish is also used behind the bar – it was laminated on to glass, lit from behind and trimmed with bronze. The designers worked very closely with joiners and suppliers to create a pearlised bronze finish for the timber of the bar. The front of the bar is clad in crocodileembossed leather in dark chocolate with a hint of bronze. Red leather bar stools and lounge chairs lift the darker colours of the bar.

Now you see the RCA building, now you don’t