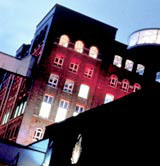 There is subtle form of vanity publishing that we are all used to in the design industry. So familiar is it, in fact, that we hardly ever stop to consider what’s actually involved. This is the sort of publishing whereby individuals or groups have books devoted to them and their work. Just occasionally such books are privately printed, much as if they were corporate brochures. But more usually they come out under serious imprints. The imprints of good, reputable publishers operating according to strict commercial, and even artistic principles.

Let me issue three disclaimers at this point. First, all the books I describe henceforth in this feature are (with certain reservations, as you’ll see) good, interesting, and deserved to be published. Second, I am not for a moment suggesting that wads of folding money were handed over in order to get them into circulation. And third, I am not going to get all snooty about the process, for the very simple reason that I am intermittently involved in it myself. No one has ever discussed the sums with me, and I make it my practice not to ask, but it’s pretty obvious that some of the books I’ve been asked to write, or contribute to, contain an element of hidden subsidy. Should any other writer in this field, or subject of a book, suggest to you that this is not the case for them – you should give him or her a long, quizzical look. At best, they are naive. After all, it’s not as if this is an illegal activity.

This is because a lot (I am tempted to say the majority) of single-practice design and architecture books are simply not commercially viable, if left to live or die by the unfeeling dictates of the open market. The market is small: only a limited number of people and libraries want to buy such books, however good they may be. Consequently, the numbers that need to be printed are equally small. On the other hand, quality of reproduction counts for a lot – you need good designers, good colour photography and processing, good paper, good binding. Once you add high quality to a small print run, the result is one expensive book. And high cover price equals even lower sales. You’re stuck in a vicious circle. However you look at it, unless you are a dead fashionable, world-famous name, especially in the US – and sometimes even if you are – the commercial sums on your book are just not going to add up. Nobody is going to publish it, unless you can bring some kind of subsidy to the table.

In the academic world, this commercial gap can be bridged by grants – there are fellowships and trusts that exist purely to allow good and original research to get into print. But in the commercial world, there are no grants. The best you can hope for is sponsorship – which might be forthcoming if the book is the outcome of a sponsored exhibition. This, for instance, is true of the latest, sumptuous Bruce Mau-designed book on architect Frank Gehry. It’s essentially the catalogue of his latest exhibition at the Guggenheim, and it’s sponsored by the same people – who in the American way give their messages of support in prefaces.

Otherwise, there’s really only one source of subsidy – yourself. Perhaps you can make the numbers stack up by doing most of the production donkey work yourselves, unpaid. Your work input is a form of subsidy. Maybe you can strike fantastic deals for colour separation with people you use already and who value your business. That’s another form of subsidy. Often the photographic costs don’t come into the equation because it’s a routine business expense for you to have all your work beautifully photographed – another hidden subsidy for the book. On top of all this comes the simplest and commonest bridge across the commercial publishing divide: you know you’re going to give lots of copies of this book away to clients, potential clients, and friends, so you pre-order a certain number. That private sale, when added to the numbers the publishers calculate will sell through retail outlets, might well balance the accounts.

And sometimes – let’s not be downbeat about this – a design book can, indeed, be a surprise hit, sell in huge quantities, and go through many printings. Hard to think of too many examples, but Rem Koolhaas and Bruce Mau’s S,M,L,X,L certainly fits the bill. Like Stephen Hawking’s A Brief History of Time, nobody understands it or even attempts to read it, but loads of people think they have to buy this bible of cool. As successful was architect John Pawson’s Minimum, another fashion item that sold and sold, as did Future Systems’ two For Inspiration Only volumes. Significantly, none of these books was a straight monograph: all three looked beyond the work of the practice in question. They offered more.

Two recent monographs, however, give you the flavour of the main marketplace. The first is Ideo: Masters of Innovation by my old friend and founding editor of Design Week, Jeremy Myerson. It’s published by Laurence King, for which I do some work myself, so this is starting to look all very cosy. Even cosier, in fact, when I tell you about the other monograph: Imagination: Ideas and Evolution, by various hands, published by Phaidon – which also publishes two of my books. Let me assure you that not only did I have nothing whatever to do with either book, but that I didn’t even know they were in the pipeline until I got the bumf through from the publishers like every other hack.

Make no mistake; these are both straight-down-the-line practice monographs. The Ideo volume, designed by the excellent Atelier Works (with which I too have worked, so there’s another declared interest to add to the heap), just runs through a numbered sequence of the firm’s product design work. Myerson has known Ideo’s founders, Bill Moggridge and Mike Nuttall, ever since they arrived in California. The book describes their work. End of chat. It’s as functional and clean-designed an object as Ideo’s own products. Difficult to get excited about. One can carp, though. Does the erudite Myerson, in his introduction, really have to reach deep into the journalists’ clichÃ© bag to produce such a phrase as “The rest, as they say, is history”? That sort of thing can really put you off a book.

As you would expect from Gary Withers of Imagination, his book is considerably more ambitious. It looks very good indeed. But it is arranged in zones, rather as the Millennium Dome was, each zone given an appropriately vacuous name: Entertain, Inspire, Persuade, and Amaze. As if that wasn’t enough, it has been given an introduction by another ex-Dome man, the supremely talented and amusing Stephen Bayley (“Does Imagination have a ‘style’? No, not really. Does Imagination have an ‘offer’? You bet.”). With little aperÃ§us like this, no wonder the book has an uphill struggle to make us like it. I don’t deny that Withers is some kind of communications genius, nor that good people have contributed to the book – ranging from Sean Perkins of North to Mike Davies of the Richard Rogers Partnership. For all that, it has the unmistakable whiff of the corporate brochure. You just know that Withers will be handing this out to clients from Tokyo to Detroit. And they won’t have to pay £40 for it, though many of his lesser rivals will no doubt be glad to.

However, Phaidon can most certainly push the envelope when it wants to. If I had to make any predictions about a real book from that stable that deserves to hit some pretty starry sales figures, I would single out Alan Fletcher’s forthcoming The Art of Looking Sideways. It’s by Fletcher, it’s designed by Fletcher, and Fletcher has an overall watching brief over design for Phaidon, for whom he devised the triple-platinum Art Book and its derivatives. But crucially, it’s not about Fletcher, though his experience and unmistakable graphic style permeates it. Again, it’s no monograph. It’s an inspired, eye-opening, colourful gallimaufry of a book about the world and everything that is in it. It could sell in big numbers (it’s good value for a lavish book, so Phaidon has clearly printed a lot), or it could flop totally. Either way, it deserves to be regarded as an immediate classic. Vanity publishing? Far from it. n