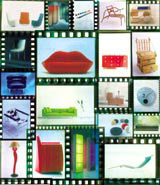 It’s difficult to believe that there was ever a time when this country wasn’t acquainted with masters of 20th century furniture such as Marcel Breuer and Charles and Ray Eames. Even more difficult to remember when our local high street wasn’t crammed with Habitat branches, accessories emporiums and swanky Italian furniture showrooms. Yet in the UK the lust for contemporary furniture didn’t really start until the mid-1960s and spread only in the late 1980s. By the time the economic optimism kicked in in the 1990s, lifestyle press supplements were full of ‘design’ sections and most urban, young professionals could roll off the top of their tongue Italian names such as Cappellini and Cassina.

A few pioneers can be deemed responsible for the British public’s design appreciation, most notably Terence Conran with the opening in 1964 of the first Habitat store in London’s King’s Road and the promoting of a ‘Continental’-inspired lifestyle. It was a curious serendipity that saw Zeev Aram opening the same year a furniture showroom also on the King’s Road. As he recalls it, nobody at the time was stocking the kind of design widely available in Europe. ‘When I asked architects if they knew Eileen Gray’s furniture they would mutter something like, “she rings a bell”,’ he says.

Aram remembers spending the first weeks in the corner shop opposite his Aram Designs showroom eavesdropping the remarks of passers-by to gauge their reaction. ‘I was concerned about not being ignored,’ he recalls. ‘It was encouraging when they crossed the road to stop and look at the window.’

Today, Londoners are spoilt for choice. Only last autumn, B&B Italia, Kartell, Driade and Alessi all opened new concessions in the city, while Artemide unveils its new showroom this week. Aram himself opens at the beginning of April, with his daughter Ruth and his son Daniel, a 1858m2 store in Covent Garden. The store, designed by architect Walker & Martin, will feature in-store graphics, identity and a website by Studio Myerscough. Competition doesn’t worry Aram. ‘It’s a chicken-and-egg situation,’ he says. ‘The more customers appreciate good design the more competitors will tap into that market.’

Aram claims his will be a destination store, which along with the usual suspects (Vitra, Knoll, Fritz Hansen, Cassina and Porro among many) will feature a special ‘quirky’ area devoted to experimental designs, prototypes and work in progress by students and young designers. The floor devoted to accessories, bedding and children’s furniture is curated by Ruth, who having decided to follow her father’s enterprise, has closed down her own Aram Shop in Hampstead. Although Ruth admits that much of the furniture may not be exclusive, it will be the way it is selected and displayed that should attract the customer’s eye.

Customer service is what the family is counting upon, an experience honed over 30 years and which includes contract service under the old company Aram Designs. On the business front, Daniel will be in charge of developing the long-term strategy and development of the company, having a marketing background and experience with companies such as Unilever and Kingfisher. While for some, the family connection could be a little too close for comfort, Zeev seems to relish the challenge. ‘I will be a thorn in the side for Ruth and Daniel because I don’t like mediocrity,’ he jokes. He then adds, ‘It will be a great experience. We will be careful not to tread on each other’s toes.’

On the other end of the spectrum, but with a similar family-oriented management structure lies Artemide’s offer. On the back of an incredible expansion period which has seen the Italian light manufacturer open 28 showrooms around the world over a period of three years with an average of eight a year, comes the launch of the London showroom in Great Portland Street. Masterminded by Carlotta Bevilacqua, Artemide brand strategy and development manager, architect and wife of visionary owner Ernesto Gismondi, the showroom has been conceived as a ‘media machine’ that will promote the company’s lighting skills and culture of responding to human needs.

Each area will have a diversified offer, from showcasing the products to a library area and a training and meeting room. ‘All this is part of a strategy to cover both consumer and the contract market,’ explains Bevilacqua. ‘We will offer consultation to architects as well as workshops and exhibitions.’

Bevilacqua claims the time is right for re-entering the London market (they previously had a Covent Garden showroom and have always kept distribution offices in the city), since London is perceived as an international platform for design. She dismisses fears of recession with the argument that for an enterprise as global as theirs there will always be some areas that are economically unstable, but that should not impinge on Artemide’s long-term strategy. ‘The British culture and market is ready to respond to our presence,’ says Bevilacqua.

She believes that although traditionally the British consumer has relied on multi-offer concepts such as The Conran Shop, taking into little account the name and heritage behind the furniture it was buying, a new awareness has now entered the public, who is now ready to perceive a brand like Artemide. ‘The difference is like buying from Armani’s flagship store or from a more familiar, boutique concept which stocks the same label,’ she explains. ‘Both concepts reinforce the notion of the brand.’