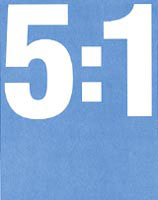 Lederhosen, beach towels, sausages and one renowned football result are just some familiar German archetypes featured in a campaign by Brighten The Corners designed to encourage British youngsters to learn German.

Large type is used to attract people to the posters and postcards and read the smaller type alongside a Learn German strapline. ‘5:1’ reads ‘(there’s nothing to lose)’. The campaign kicks off on 15 March and posters will be sent to schools and colleges.