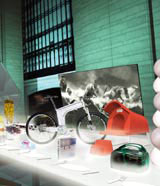 Casson Mann has won Best of Show in the 2002 Design Week Awards for the Design Council’s travelling show Great Expectations, which also won the award for Temporary Exhibition Design.

The Magna Project in Sheffield won a Leisure Environments award for Wilkinson Eyre Architects and the Permanent Exhibition Design award for Event Communications. Lighting Design House and The British Museum Design Office picked up commendations for permanent shows, while At Large and Landor Associates were commended for temporary exhibitions. Product design was strong this year, with Ideo winning the Consumer Product Design prize for the Muji CD player and Burkhardt Leitner Constructiv the Industrial Product Design award for the Pila demountable office. Goodwin Product Design was commended for the Franke Beach sink.

Restaurants, CafÃ©s, Clubs and Bars yielded two winners: Arthur Collin Architect with NB Studio for Nincomsoup and Jestico & Whiles for Innecto. The Retail Environments prize went to 6A Architects for Oki-Ni, but, while Brinkworth and Hemingway Design were commended, there was no winner in Workplace Environments.

Full details are published in a DW Awards supplement available free to subscribers, £25 for non-subscribers and £10 for award winners from 020 7292 3704.