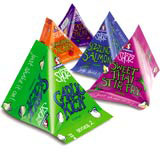 Herb and spice giant, Schwartz is attempting to lure young people of the ‘can’t cook, won’t cook’ mentality into the kitchen with the launch of a range of single-serve seasonings next month.

Schwartz Shotz, which are scheduled to launch in supermarkets in April, feature packaging designed by Go Ballistic for a five-figure fee.

The single-use herb and spice servings are packaged in ‘radical’ bright, pyramid-shaped packets with the line ‘just shake it on’, designed to open up Schwartz to an 18-30 audience, says a Go Ballistic spokesman.

The packs feature the Schwartz logo on a small scale. The group debated whether to use the logo, as it was not initially convinced it would sit comfortably on the youth-style packaging, he adds.

‘The Schwartz logo is very conservative and Shotz is a real departure for Schwartz,’ says the spokesman.