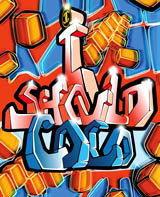 Alex, Fred, and Nat. If you were writing a not-naff version of [BBC2 series] Attachments about a young, as-funky-as-they-come digital and graphics design group with a dream client list (including White Cube, The Face, BBC, MTV, Paul Oakenfold, the Serpentine Gallery, ORMS, Carhartt Skateboards and the Design Week Award-winning website for photographer Nadav Kander) and an Islington base to match, you couldn’t invent three better names than Alex (Maclean), Nat (Hunter) and Fred (Deakin), the three founding directors of Airside.

Other clichÃ©s abound; MAs from the Royal College of Art and St Martins College of Art and Design, a large open-plan studio housing a team of nine staff and stuffed full of Japanese toys and graphic ephemera, a bleary eyed Maclean working till midnight on a Sunday, Deakin unable to join us as he’s recording his band Lemon Jelly’s second album but dig deeper and you’ll find things that make Airside refreshing in outlook and output.

Those Japanese toys, for example, are Airside-designed prototypes, commissioned in Japan as prizes to be won on the 23rd Floor, a wonderfully sticky website commissioned by John Tosh at BT Cellnet/ Madic (an experimental offshoot of BT Cellnet) as a 3G mobile games testing area. At Airside’s own site Tosh’s testimonial reads ‘ we like the way they deal with us – not like an agency working for us, more like a partner working with us.’ That telling comment about the client/ designer relationship lies at the heart of Airside’s popularity, but so do a couple of other important factors, namely luck and some outrageously astute business practices for a three-year-young group.

Maclean, Hunter and Hunter’s husband Deakin go way back. To Edinburgh in the late 1980s in fact, where Maclean worked as an interior designer, Hunter studied human-computer interface psychology and Deakin took a degree in English Literature while running a graphic design group and a bunch of clubs. The three freelanced in London after those MAs in Architecture and Interior Design (Maclean), Interactive multimedia (Hunter) and Communication Design (Deakin) until 1998, when, as Hunter recalls, ‘We got sick of freelancing and decided to get higher up the food chain. We conceived the idea that a group of freelances in a studio would be able to take on bigger and better jobs. It worked so well that after a year our accountant told us we had to form a company as we were already acting like one.’

The trio were well-placed to follow their accountant’s advice. ‘We were all relatively old when we started Airside – Maclean was 30, I was 33 and Deakin 34, and we’d worked in the industry a long time. We knew a lot of people from diverse backgrounds, and people from Lemon Jelly helped us a lot as they’re a very credible band. The illustrations we’ve done for them got us noticed by Vittorio Radice, who recently commissioned us to do a series of illustrations for Selfridges’ annual report,’ says Hunter. Illustration forms a large part of Airside’s portfolio and, made up into calendars and T-shirts, acts as an effective promotional tool for the group. The Airside T-shirt club in particular beats any old boys’ club as a way of networking, its success measurable in actual jobs: ‘We had a dry patch last year so rang up all our contacts, and ended up getting work from T-shirt club members working at ad agencies,’ recalls Maclean.

It was during that dry patch that the Jam website came along. ‘It was a turning point for us. We had no work so it didn’t matter that we only got paid like 2p to do it, and it’s turned out to be very useful for showing clients interface issues,’ says Hunter. The Jam site won Airside the aforementioned BT Cellnet job, an offbeat virtual world incorporating music, message boards, games, icons and, about to be launched, a chatroom called Unfair (think funfair gone wrong). It’s populated by animated characters cute enough to star in Monsters Inc but exhibiting slightly darker tendencies, as befits the 16to 30-year-olds the site is notionally aimed at (notionally because ‘you’re not supposed to market any mobile phone-related stuff to under-16s’, says Maclean).

The site makes full use of Airside’s aesthetic marque; bright, bold illustration-based graphics that are quirky yet slick, cute yet funky. ‘It’s not intentional, but I think there is a look that probably comes from us having a methodology on each project,’ says Hunter. ‘A lot of designers will start with design issues, playing around with forms and shape, but we start by all sitting down to find the big idea, a concept, at the beginning, whether it be a website, a sleeve or a logo. After that there are a few directions of style it can go in, but whatever it is it’s come from the same source, so I suppose it’s an aesthetic marque in the sense that you’ve always got the same small team approving it,’ she says.

Another aspect that sets Airside apart from many other small Web/ graphics companies is the trio’s enthusiasm about technical issues. ‘We’re not scared of finding out how stuff works and redefining a format,’ says Hunter. One of the projects she’s proudest of was a job for BBC digital radio, wherein ‘we actually made them change how they broadcast digital radio. We approached it as making good digital radio, not bad TV, and on top of that viewed it as an interactive album sleeve, something that enhances the experience of listening to the music with additional information and imagery’, she enthuses. ‘It illustrates why we set up Airside; getting closer to the root of a problem and doing a better job,’ she adds.

Deakin plays a large part in this process: ‘He’s very good at ideas and direction at the beginning of the process,’ says Hunter. ‘He’ll come in with a fresh eye and can take an objective view,’ agrees Maclean. If Deakin’s floating role sounds unusual, so was his insistence from the outset that they not take on boring work. ‘Deakin’s take is, “If you do shit corporate work you get more shit corporate work, and if you do leftfield kind of work that’s what will come to you”,’ says Maclean. ‘It meant two years of living hand to mouth, but it’s paid off,’ he adds.

What may not pay off in financial terms is the decision to keep Airside small. ‘It pisses me off that because we’re small it’s hard to get the big jobs we could do standing on our heads, but that big companies don’t trust us to do, as they are unhappy dealing with just one person. It’s particularly annoying because there are real advantages to such a system. A smaller communication chain is so much shorter that you can gain a lot of value from it,’ says Maclean.

Given the integral role that communication plays in all aspects of its business, internally and externally, Airside’s obvious frustration is tangible. ‘When we started we had a big learning curve about how to learn to work with each other, with employees, with clients, and I think what we learnt is that if you’re straight with people and treat them well it pays off,’ says Maclean. That, coupled with a regular process of reassessing goals and refocusing, is key to Airside’s bigger picture.

‘We aspire to doing good work and having fun. Having a nice atmosphere, a flat hierarchy, fairness and quality of life. It means we still have to make money, but having fun is a good way of summing us up,’ says Maclean.