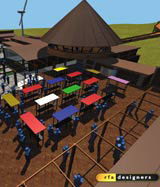 The Millennium Products roadshow rolled into Johannesburg in November 1999. Since then, attempts to promote British design in South Africa have been few and far between.

Designers, however, are beginning to show more interest in fostering links between the two countries, whose bilateral trade was worth £6bn in 2000 (Trade Partners UK).

A fortnight ago, Tomato Interactive’s Tom Roope and Farrow Design’s Mark Farrow attended the 5th International Design Indaba in Cape Town – described by its founder Ravi Naidoo as ‘a high-end event to inspire and benchmark South African design against the world’s best’. Separately, RFA director Richard Fowler is returning to South Africa this week to ‘negotiate the basis for contract relationships’ on a tourism and community project in the Khayelitsha township.

That the country is home to both new media shindigs and shanty towns gives a fair indication of its diversity and character as an emerging economy. RFA’s commission followed a visit in January last year by a group of British exhibition designers, which also included Event Communications and Land Design Studio (DW 7 March).

Trade Partners UK Cape Town representative Janet Usher organised the trip. She says, ‘Design is something we haven’t done an awful lot on. It’s a mature industry here in terms of graphic design, for example. But we would like to encourage more British companies to come out and take a look. The main opportunities will be in partnership and we do run a match-making service.’

Fowler agrees that British designers have ‘no chance’ without first finding local partners. ‘You can’t just expect to fly in and fly out,’ he says. RFA is working with Cape Town architect Magqwaka Associates. Fowler expresses confidence in ‘sophisticated [local] design and contracting facilities’.

What British exhibition designers bring to the table, says Land Design Studio creative director Peter Higgins, is high-level technical expertise in terms of audio visual and interactive effects, as well as experience in creating museum narratives. ‘UK interpretation skills are top of the pile,’ he says.

In Fowler’s view, there is plenty of good work on offer. Higgins points to strong curatorial expertise and ‘fantastic stories’ like ‘the Cradle of Humankind’. He adds, ‘Investment in the heritage and culture would bring in tourists and extend South Africa’s appeal as a holiday destination.’

But Higgins is ‘not holding his breath’ about such ideas getting off the ground. The problem is funding. The South African government needs to spend money on education and fighting Aids and potential commercial sponsors are strapped for cash, he says.

While the cultural sector is simply under-resourced, currency volatility is a wider issue. ‘The rand has devalued 40 per cent in the past year,’ says Naidoo. ‘The exchange rate is around 16 rand to the pound.’ Although fees for the township work are minimal, Fowler hopes to fix his payments in pounds sterling.

With 50 per cent of the population under 18 years old, demographics suggest South Africa is destined to become a significant market. The country has more mobile phones than landlines and a youth-oriented consumer culture is starting to develop, says Naidoo, who is managing director of the consultancy Interactive Africa in addition to running Design Indaba.

Usher says she intends to carry out an ‘in-depth’ internal review of the South African design industry. She adds, ‘We need to become more knowledgeable about the market to break it down and see where the opportunities are and what technology and skills are needed.’ But financial and cultural factors seem likely to constrain direct British involvement in the medium term.

The corporate market for identity, strategy, packaging and literature jobs is dominated by a ‘big four’ of Brown KSDP (owned by WPP Group), Interbrand-Sampson, Switch Design and Trademark Design, according to Interbrand-Sampson managing director Jeremy Sampson. ‘The major design consultancies are in each other’s faces all the time,’ he says.

For British designers, moving into this market is not half as easy as they might think, says Sampson, who first came to Johannesburg in 1968. He adds, ‘There’s a limited number of big clients and the most successful design businesses have grown in South Africa. It’s not just a case of sticking a flag in the ground.’

UK consultancies haven’t discovered the South African cost structure, which is 75 per cent of the going rate in London, says Sampson. With ‘global best practice’ and electronic communications, this allows Interbrand-Sampson to present itself as a low-cost producer within the Interbrand group, he says.

But he is also quick to spot ‘arbitrage opportunities’. He says, ‘South Africa is positioning itself as a hub for creative services – world class production values at rand prices.’

While Sampson suggests retail and interiors work is hotting up and Naidoo says specialist design input will increasingly be required ‘further up the value chain’, Naidoo implies South Africa has more to offer the UK than vice versa at this stage.

The technology infrastructure in Cape Town is the same as in downtown San Francisco or London, says Naidoo. His vision is that Cape Town will become for the design industry what Bangalore is for software providers.

South African consultancies will become ‘more assertive’ in seeking ‘strategic alliances with design and production houses in the UK to outsource front-end design or print,’ he says. Naidoo adds, ‘We’re so darned competitive, it becomes a no-brainer.’