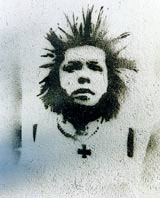 Anyone living in a city has come across stencil graffiti, but sometimes it is so subtle that only the trained eye will appreciate it. Stencilling can be unobtrusive, much of the time consisting of simple line art images or crude lettering. Many writers also choose decaying masonry as their canvas, so their work can literally blend into the background as time goes on. This certainly integrates their work into the urban environment, but it could conceivably make it hard to spot in the first place.

Tristan Manco, director of Bristol design consultancy Tijuana Design, has compiled an exhaustive book of stencil graffiti from around the world. From abrasive social commentary to tongue-in-cheek slogans, this is certainly a comprehensive selection. First impressions are good: Manco is a graphic designer by trade and the entire book, from the stencil-style typography to the clean, uncluttered layout that allows the graffiti to dominate, are a joy to behold.

It’s a shame Manco’s writing doesn’t come up to scratch. His prose is dry, academic and an effort to read. It is filled with the hackneyed jargon of the least imaginative designers, the kind of copy that makes you immediately glaze over.

However, to give Manco his due, he has taken the time to dig up a wide range of writers, and he gives them plenty of room to talk about their work.

A cursory flick through the book will not fail to draw a smile – Figure with Tiger, by JÃ©rÃ´me Mesnager (above left) is a work of subtle genius, the way the tiger is camouflaged by the decaying plaster, stalking Mesnager’s trademark white figure. Then there is Banksy, who paints subversive alien chimps wearing sandwich boards, warning humankind to clean up its act, or they’re going to take over (above right). Banksy’s work stands out even when it is covered by the visual noise of inferior writers: one particular work in London’s West End portrayed a silhouette of the Mona Lisa with a rocket launcher on her shoulder. The image was so striking, twisted and incongruously funny that just catching sight of it would lift your mood. Banksy is well aware of the potency of his work: ‘As soon as I cut my first stencil, I could feel the power there. The ruthlessness and efficiency of it is perfect.’

There are other writers, such as Mitch and Swifty, that are taking the graffiti aesthetic and applying it to graphic design and typography. Mitch’s custom typography, which Manco aptly describes with the oxymoron ‘retro-future’, is peculiarly satisfying: the simplicity of the letters; the way different words are juxtaposed to make a vibrant complete image; the way he uses spray paints to, in his words, ‘provide some bad-ass colour fades/splats/cracks’, should be an inspiration to any designer.

Similarly, Swifty’s installation for an Amsterdam coffee shop, which consists entirely of slang words for marijuana, in a stunning array of day-glo colours, is a riot of style. However, graffiti starts to lose its power if you take it off the streets. Banksy knows what he prefers: ‘I’ve done gallery shows and, if you’ve been hitting all sorts of places, they’re a real step backwards.’

So take a look around you, because you could be missing out on what could be described as underground pop art for the 21st century.

Stencil Graffiti, by Tristan Manco is published on 11 March by Thames & Hudson, priced £9.95

Campaign by Brighten The Corners to encourage the learning of German