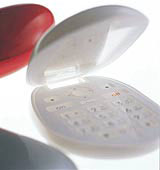 A retrospective of an industry after just a few decades would usually seem a touch premature. But for the mobile phone industry, 20 years is a lifetime. How long is it, therefore, before today’s handsets become as dated as the bricks on show at Motorola’s Mobile exhibition at the Old Truman Brewery?

Not long, if some of the most recent handset designs are anything to go by. Design is playing a greater role in the current climate of falling sales and cooling consumer demand – it is one of the few things that differentiate the manufacturers as phones become more of a commodity.

The slowdown in mobile phone sales has been due in part to a near-saturated market. In the UK, 77 per cent of the population own a mobile. In Japan, traditionally a gadget-mad nation, this figure is higher. Meanwhile, ownership of Nokia mobiles, the world’s largest manufacturer, in the company’s core European market is approaching 100 per cent.

Despite Nokia’s saturation, however, it is still posting strong handset sales with a 68 per cent jump in third quarter profits. It is hoping the anticipated success of new colour screens and picture-messaging technology will further stimulate demand.

The mobile business originally grew because the product – this new, small, portable thing you can make phone calls with – was in huge demand, says Gus Desbarats, chairman of Alloy Total Product Design. ‘For [telecoms] companies the issue has long been whether they could make enough products. They’ve had it easy. But now they’re finding life hard because there are a lot of players fiercely competing in a shrinking market,’ he says.

Manufacturers are hoping third-generation – or 3G – phones will reverse their fortunes, but these have got off to a slow start, not least because demand is slackening. The 3G phones of the future allow different technologies, such as PDAs, digital cameras and streaming video (which quickly downloads such things as video clips from websites, the live sequence of a football team scoring a goal or breaking news) to converge in a single, hand-held device.

But this comes at a price, says TKO Design principal Andy Davey, who has designed mobile phones for companies including Alcatel. ‘The buffer between 2G (existing mobiles that permit phone calls and texting only), and 3G, called 2.5G, has proved disappointing. There are few handsets compatible with it,’ he says.

And it’s expensive: to send a still image costs about 50p. As a consequence, 3G won’t be launched until next year at the earliest. Consumers need to be convinced before then that 2.5G and 3G are worth the added cost, complexity and larger handset size the technology demands.

The future 3G phones represent a bizarre reversal in a growing trend, until now, for the miniaturisation of mobile phone technology. Because a lot of technology is being introduced into the phones, they’ll get bigger, says Janko Mrsic-Flogel, director of business development of a new product called Charge Me, a kiosk in public spaces used to recharge phones (DW 24 October). ‘Batteries will be bigger to support higher bandwidth communication and power-hungry tasks like playing video and high quality stereo sound,’ he says.

As demonstrated at Motorola’s exhibition, which opened last week, the hilariously clunky 1970s brick phones show how miniaturised mobiles have become. ‘Technology is now a lot smaller and doesn’t determine the size and form of mobiles so much any more,’ says Factory Design creative director Adrian Berry. ‘Phones no longer have to be hand-held. A lot of current student work separates the different components of mobiles into pieces of jewellery such as earrings and watches,’ he says. Bluetooth technology, a wireless system that allows similarly equipped electronic devices near each other to communicate, has facilitated this trend for fragmentation of components.

Increasingly, people will want more choice as to how much phone they carry around, predicts Desbarats. ‘Smaller components, be it a headset or a tiny, lightweight device to slip into your pocket when you go clubbing, will be suited to specific tasks. They’ll come in a greater diversity of materials such as Neoprene and leather,’ Desbarats says. Could phone brands one day be perceived as jewellery brands, and will jewellery labels extend their brands to include mobiles?

The current trend for fashion-oriented mobiles is symptomatic of a sea change in mobile design – a snowballing move to personalise it that goes way beyond coloured clip-on covers or customised teenagers’ phones.

‘The culture in mobile companies has been very techy, but now they’re pushing to make them funky and fun,’ says Desbarats. ‘The prime focus at Nokia now, to boost profits, is colour screens and multimedia messaging or MSM – transmitting and receiving video images. In branding terms, the industry is having to mature like the car industry has done, with each manufacturer learning the value of visually differentiating itself very precisely from others,’ he adds.

The second wave of any industry’s development, after it has reached technological e e maturity, is design, says Mat Hunter, head of interaction design at Ideo Product Development.

As such, the major mobile phone players themselves are busy exploring new concepts, on display at www.3g-generation.com. These are typically colourful with unusually large screens, the better to flaunt colour picture-messaging. But when quizzed about the future of mobile design for this article, Nokia and Motorola declined to talk about future trends.

These are much in evidence in some iconoclastic concepts from designer Naota Fukasawa, working for Ideo, who has dreamt up a seductively smooth, colourful, pebble-shaped phone called Ishicoro, which emits a subtle rectangular glow when it receives a call. ‘Ishicoro is inspired by smooth stones found on river beds. I thought the irregular surfaces would inspire users to play with their phones,’ Fukasawa says.

Fukasawa has also designed Info.bar, a concept phone designed to resemble a bar of chocolate with keys in different colours chosen by its users. The keys inventively offer an alternative interface.

‘Cellphones aren’t just about communication, but express an individual’s identity and can be like fashion,’ Fukasawa says.

Ideo has also developed some jokey, idiosyncratic prototype phones, including Social Mobiles, in response to the widely perceived anti-social behaviour of phone users. One gives users an electric shock whenever they start to gab loudly. Another allows someone within earshot of loudmouth callers to disrupt them by catapulting a booming noise into their phone.

Deterring phone theft is being factored into contemporary phone design, says Desbarats. Designers are looking at matching a phone’s serial number with the one on the SIM card, disabling the SIM card and thus disabling the phone. Voice, thumbprint and retina scan recognition are also being investigated.

Smart phone technology, meanwhile, is making huge strides. Orange has conducted research into this with its Orange at Home project, which observed how four families living temporarily in its ‘intelligent home’ preferred to interact with its smart technology. Last month, leading Japanese electronics companies such as Toshiba, National Panasonic and Mitsubishi revealed schemes for ‘intelligent households’.

For example, mobile phones, used remotely, will be able to alter a home’s air-conditioning from a train. Or, if a package arrives while you are away from home, a front-door camera will transmit a photo of the delivery person. Satisfied with his or her identity, you can open the door remotely.

And thanks to new I-mode technology, which can take and transmit pictures, mobile phones will soon function as credit cards, too. Already in Japan, you can simply wave one in front of a scanner on an I-mode Coca-Cola vending machine and your credit card bill wi

ll be debited in exchange for a Coke can.

Ultimately, perhaps no one can predict the way mobile design or technology is heading. There is an organic element to its evolution that can’t be underestimated. The soaraway success of Short Message Service or what’s commonly known as texting, for example, took manufacturers completely by surprise. They might be experiencing a slowdown in sales, but there will always be a demand for mobiles. As Hunter says: ‘What drives phone use is people’s perennial desire to communicate.’

Mobile is at The Glass Gallery, Old Truman Brewery, 15 Hanbury Street, London E1 until 23 November. Further information can be found at www.motomobile.com