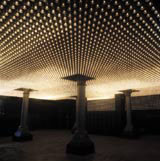 Such dynamic effects have been captivating designers worldwide. At the request of DJ club owners, lighting and music are being dramatically synchronised and operated in tandem by DJs and LJs (lighting jockeys) to enhance the clubbing experience. Designer Stephane Dupoux loves using light to alter space. At boutique club Cielo in New York, his flashing beatbox interior was created by interspersing soft plush ‘logs’ with backlit Plexiglas tubes. These parallel lines of light blink to the beat, making the entire club pulsate with sound and light. Mirrors enhance the effect. Collaborating with RS Lighting, Dupoux has upped the ante with the lighting at the recently opened Quo in New York. The $120 000-$150 000 system includes rainbow-hued water columns and audio-linked wall panels that can change colour, image and intensity. ‘It’s utterly bespoke,’ says Lucroux. ‘It means the club will never have a stagnant feel, and you can even project images that create an underwater feel.’ RS Lighting is devising a new system for Dupoux’s next project, restaurant Cocoon, opening this month near London’s Piccadilly.

Further afield at D-Edge club in SÃ£o Paolo, Muti Randolph inserted a grid of Plexiglas and metal boxes containing neon bulbs into the interior. ‘I chose black for all the “material” elements to make them disappear, and let the light architecture prevail,’ he says. ‘The interior is like a computer monitor, but instead of pixels, lines of light are programmed to radiate various colours and flash to the beat.’

Randolph calls this concept a 3D matrix. ‘My goal was to make people actually see the music, to give rhythm to space and colour to sound.’ Three giant LED audio spectrum analysers connected to the audio system rise and fall like giant graphic equalisers, reinforcing the effect. Amar has incorporated a similar feature at Nirvana, inserting giant light strips, or ‘frequency bars’, into the mirrored walls surrounding the dancefloor. These flash various shades of neon in time to the music.

‘LEDs are not sexy – you can light a room with LEDs but still make everyone shiver with cold,’ explains PollÃ©. ‘However, an ordinary lightbulb contains the full range of the colour spectrum, and when they are dimmed they turn red and that makes them sexy as hell.’

Back in Kabaret’s Prophecy, video system specialist Creative Technology and UVA developed the kinetic backdrop from modular intelligent LED pixel blocks, upon which graphics and animations are superimposed to radiate an ever-changing image.

Those falling under KP’s spell include Will Alsop Architects. ‘It’s fascinating to know you can completely manipulate a surface,’ says architect Tarek Merlin. ‘We don’t know yet if this is suitable for an external surface of a building, but it could take our colourful elevations to a more dynamic level.’ Buildings looking like pop videos – now that sounds like fun. No wonder UVA has received a tentative enquiry about a residential installation from singer Usher. Such glitzy lighting is bound to make any pop star feel at home.