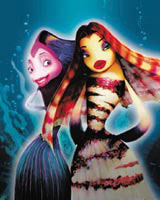 Was it just a coincidence that DreamWorks decided to set its new animation underwater? After the huge success of Pixar’s Finding Nemo, the producer of Shark Tale must have agonised over the pros and cons of being, commercially at least, second in line for global patronage.

On the one hand it’d be cashing in on a winning formula; on the other, Shark Tale might be seen as a pale imitation of Finding Nemo.

As it turns out, Shark Tale is visually independent from Nemo, and different enough in style and narrative to carve its own niche. Instead of Finding Nemo’s authentic-looking coral reef, for example, Shark Tale features a bustling underwater city, Southside Reef, where the fish are stopped in their tracks by neon street signs proclaiming, ‘Swim’ or ‘Don’t Swim’, and where whales check into the Whale Wash to be waxed by a team of real turtles.

Art director Samuel Michlap and his team coined the term ‘fishification’ to describe the process of turning a recognisable urban landscape into a watery fantasy world. ‘We picked buildings that closely matched the look of a plant or reef and created a hybrid of the two,’ says Michlap. ‘We wanted icons that were recognisable from the everyday world.’

Visual effects supervisor Doug Cooper explains that the settings were often dictated by the organic nature of the environment. ‘You couldn’t have a building where all the windows looked the same because they have all been carved out of coral. They would all have to be a little bit different from one another, which is incredibly difficult to achieve with CGI,’ he says.

Brands such as Gap and Coca-Cola take on a distinctly fishy flavour and there is an amusing reference to Steven Spielberg’s Jaws – DreamWorks is his production company – in the film’s opening sequence.

Oscar, the main protagonist, voiced by Will Smith and looking uncannily like the actor reincarnated as a fish, is a humble whale washer who lives downtown and dreams of being rich and famous and living in the penthouse suite of Southside Reef’s tallest tower.

He is befriended by Lenny, the vegetarian shark (Jack Black), who brings shame upon his father, Don Leno (Robert De Niro), with his curious and inexplicable compassion for all living things.

The principle difference between Shark Tale and Finding Nemo in terms of characterisation is that Shark Tale has humanised its aquatic cast to a far greater degree. While making sure each of the main characters originated from an existing prototype, the creative team has squashed and stretched to suit its own needs.

For instance, the two ‘girl’ fish vying for Oscar’s affections, Angie (RenÃ©e Zellweger) and Lola (Angelina Jolie), have billowing hair instead of dorsal fins and look as if they are dressed by Versace. Oscar’s loud, garish, hip-hop world contrasts well with the muted, faux-sophisticated mob hang-outs of Don Leno’s Godfatheresque patriarch. He and his cohorts inhabit a shipwrecked ocean liner, where they have converted the first class lounge into an exclusive restaurant, all mahogany wood panelling and leather wingbacks.

The lighting in Shark Tale is particularly inventive, and maintains the illusion of being underwater in myriad subtle ways. According to the film’s makers, ensuring those wavy, rippling light patterns are cast on to everything in sight is one of the biggest challenges.

Because layout in animation is akin to live action’s cinematography, the makers of Shark Tale discussed the camerawork in terms of ‘crane shots,’ steadicam, and the like. Camera blocking was first laid out using physical models, then in the computer with animatics – computer models of scene elements, including characters – that allowed the film-makers to build a scene on the computer in 3D.

The ‘Sharkcam’ involved placing a virtual camera in the head of a shark to give the audience a shark’s eye view as he swaggers through the water. Another attribute that distinguishes Shark Tale from Finding Nemo is the synchronisation of the visual effects with the music. The effects team therefore not only had to ensure the environment was in a state of perpetual motion, but also that it moved in time to the pop soundtrack.

Shark Tale is on general release from Friday 15 October