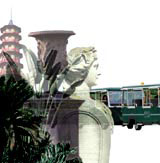 New product development, product design, packaging, branding, shop interiors – they all come under the remit of Chris Walton, and all go towards her ultimate aim of “delivering a promise”.

For Walton’s specialism is creating and enhancing trading opportunities for museums and cultural venues. In April she left London’s Kew Gardens, where she had been managing director of the Royal Botanic Gardens of Kew Enterprises for four and a half years, to go freelance. She is currently working with The Diana Memorial Fund and the City Art Gallery in Manchester, which will reopen in 2002 after a refurbishment.

Venues are becoming increasingly aware of the commercial potential of developing their retail operations. “This is particularly important because other sources of funding are becoming more difficult,” says Walton.

The aim, says Walton, is to market the venue through the product, and hence generate sustainable income. Over the past five years there has been a move to develop themed products from archives, and this is Walton’s forte. She says that, “Own brand generates more profit.” And she has the figures to prove it.

While she was at Kew Gardens, Walton opened three shops in Japan, launched a US licensing programme, refurbished the Kew on-site shop and moved from 5 per cent own-design and own-brand to 70 per cent. The trading arm’s bottom line profit grew each year by about 20 per cent.

For Walton, it is about spotting commercial opportunities and then turning them into reality. “The first step is to develop a strategy which must include brand development, for licensing, product development or retail. There has to be synergy,” she says.

Her involvement with design came about because “the problem of finding products led to working with designers”. This was followed by the need to brand the product with an institutional logo, and the redesign or rebranding of the shop. She describes herself as “the bridge between the museum and the designer”.

The test, she says, is if you can take someone blindfolded into a store, and they immediately know where they are once the blindfold is removed. At Kew she worked with John Ward Design. The consultancy was briefed to design a shop interior that reflected the gardens, and Kew’s focus on conservation, science and nature. It created the logo and graphics, which were applied to bags, point-of-sale material and uniforms, and advised on merchandising. ©

The identity of the store, now called Kew Garden Shop, is yet be applied to products.

But it is the themed product ranges themselves which become the stars of the retail business. At Kew, Walton brought in Quincy Leon from Liberty as in-house product designer. Walton would brief her to create a range to tie in with a current collection. These designs would be applied to toiletries, glassware, accessories and such like, and could even extend on to packaging and wrapping paper. “Forget the cost of the design, because it’s used in so many ways,” says Walton.

And a product that is given as a gift becomes a marketing tool in itself. Meanwhile, price points are moving up all the time, she says. The average price of a gift is up to £30 rather than £5, as it was a few years ago. Walton divides products into three categories: the souvenir for £10, the gift from £5-£20, and the trophy from £15 upwards. The conversion basis of visitors that become shoppers is 20-25 per cent in most venues. And the items on sale need to be relevant to the museum’s demographics, which can range from the expert to the tourist, the school child to the pensioner.

Once a venue has developed a range of its own products and has proved they can be commercial, there’s a platform to develop a licensing business. A collection of Kew-branded fabrics is now sold worldwide, designed and manufactured by Brunswick & Fils in the US.

But surely there is a danger of over-stretching and even diluting a venue’s brand. “You can commercialise your products without prostituting the institution,” says Walton. “Products should become trophies marketing the venue. That’s the aim of museum stores and that’s where the design element comes in, creating something unique and relevant to the collection.” And this is where the quality of the product matters, because it carries the name of a major museum. Leon created two orchid concepts to tie in with Kew’s orchid collection – one traditional and one contemporary.

“If the license contract is right, you won’t be misrepresented,” says Walton. Any dilution of the brand can be avoided by only licensing one product in each sector with an exclusive long-term partnership. “Our museums have been around for over 100 years; it would be irresponsible for trading managers to thrash the brand so much that it lost credibility,” she says. But retail, however profitable and important to the institution, should know its place. “The shop or cafÃ© shouldn’t become a destination in itself,” she warns. “As traders we must not become too self-important – retail is a supporting role.”

In fact, she envisages more opportunities than pitfalls, particularly for some of the more provincial museums with unique collections, predicting that “they will begin to realise their potential.” At Manchester’s City Art Gallery, she can put the collection of Pre-Raphaelite art in front of Leon and say “go play”. She envisages opportunities for other centres, such as the newly opened Lowry in Manchester. What about some earrings that are inspired by the dog figures which appear in many of LS Lowry’s paintings?

Walton started out in commercial retail, working for chains such as Dixons and Boots the Chemists. She moved into non-profit organisations, sourcing retail outlets and goods for Barnado’s, and then at the British Heart Foundation, finding sites, shopfitting and opening 100 stores a year. Her first senior job was with the Royal Naval Museum, where she was a chief executive of the trading arm for three years.

She says she moved across to non-profit ventures “because I have always loved retail, but there has to be something more long term than a day’s work. I wanted to be more involved in the development side. You do get a great kick seeing the profit line at the end of the year – there is an extra motivation because what you do makes a difference in a small way.”

She has been freelancing since 1 April, working through her organisation Chris Walton Associates – a group of independent consultants including graphic designer Michael O’Callaghan of CDA in Worthing. At the moment she is developing a website system to replace museum mail- order catalogues: “They have failed because they are so expensive to produce.”

So what’s next? According to Walton, cause- related marketing will become the buzz word with non-profit organisations. In the meantime, she’s responding to a stream of requests from venues up and down the country. Watch out for those earrings.