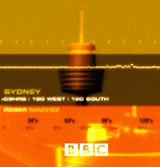 Deepend London’s moving image team has created titles for Choice World Clubbing, a new BBC travel and clubbing documentary which goes on air in October, presented by DJs such as Judge Jules and Pete Tong, from clubs in cities including Berlin, San Francisco and Tel Aviv. The credits feature longitude and latitude references, city names and time differences from London to achieve a sense of a jet-setting lifestyle. They project the club scene with fast-moving typography, and music by Deepend sound designer Richard House. Deepend graphic designer Luiza dos Santos Cruz says it wanted to avoid clichÃ©d Ibiza-style dance shots. ‘By combining club footage, cityscapes and high-profile DJ names, we are telling the viewer instantly the show is about travel and clubbing.’