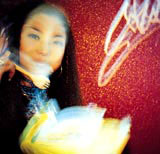 It is a small, no-frills, manual compact camera from Russia, with Cold War styling and little in the way of fancy digital extras. Yet in the few years that it has been marketed in the West, the Lomo camera has established a cultish position that would be the envy of any new product.

And, as well as becoming part of the armoury of many photographers and designers, the Lomo is now having repercussions as a working method. For Lomography, as its adherents call the art of Lomo photography, is dynamic, pacey and playful, not static and heroic. Something about the Lomo philosophy, as well as the camera itself, has caught a wave.

Affection for the unique little camera has quickly grown, and this year there has been a plethora of Lomo-related events, including the Lomographic Society appearance at the Photokina 2000 photo fair in Cologne this month; a Lomograph group exhibition at the prestigious Kunsthalle in Vienna, and in October, the finals of the Lomolympics, to be held in Japan. From enigmatic beginnings as a Soviet camera developed with espionage in mind, via its take-up by a few visual pioneers, the Lomo has become no less than a global phenomenon.

Lomo is short for Leningradskoje Optiko Mechanitschzskoje Objedinznie – Russian for Leningrad Union of Optics and Mechanics, which operated a military optics factory. The acronym Lomo was adopted as its flagship camera’s name, and it is still made by hand in St Petersburg, as the city is now known.

The progenitors of the Lomo movement were two Viennese students called Wolfgang Stranzinger and Matthias Fiegl, who bought a Lomo, quite fortuitously, in Prague in 1991. The results, they said, “blew our minds. Some were ordinary snapshots, others had these rushes of blurred, intense colour. Details you’d normally miss seemed to jump off the print.”

In love with this low-tech marvel, they set up a Lomo society, secured an exclusive deal with the Lomo factory and developed a network of Lomo “embassies” around the world which act as franchises, selling the cameras to Lomographers in their various territories – along with sizeable dollops of the special Lomo language. It is a sales technique that encourages one to feel part of some warm international fraternity.

It was lucky for Lomo, as the factory in St Petersburg was floundering before the Lomo Society picked up on the camera. “In the beginning, Lomo thought it was like an April Fool’s joke,” says Amira Bibawy, the “Lomospeaker” from Vienna (her title is an example of Lomo’s idiomatic corporate communication: part spy-talk, part touchy-feely ad copy). “Now they love us.” Indeed, for the Lomo boom has created employment in Russia and may have even saved the factory. One of the many curious Lomo-facts is that Russian vice-prime minister Ilya Klebanov used to be the general director of Lomo, and his consultant – who green-lighted the Viennese initiative – was a certain Vladimir Putin. Russia’s top brass, then, can be said to be behind the Lomo boom.

For such grey men to be behind the Lomo is astonishing, for it has become a way of encouraging photographic serendipity and, in the Lomographers’ hands, propogating an ideal of ludic creativity. Lomography, says Bibawy, “is something in between a profession and a hobby. It doesn’t have the options of other cameras, but the important thing is the way it encourages you to play, and the way it becomes part of your life.” This is crucial, for the Lomo takes away the seriousness of photography as a mystical skill and rejuvenates the creative spirit, inciting an opportunistic freshness that has attracted many photographers and designers. The friendly “corporate” design by Bernhard Winkler, as seen in the website, also reflects this ethos.

Stranzinger and Fiegl’s early affection for the unassuming camera has now translated to around 300 000 Lomo owners across the world. It is a curious confederation, among them are Fidel Castro, the Dalai Lama, members of Pulp, Chris Lowe of the Pet Shop Boys, David Byrne, Moby, Karl Hyde of Underworld and – wait for it – Babsi Bekker, Boris Bekker’s wife. There are 40 or so “Lomo embassies”, ranging from Hanoi to Cairo and Kathmandu, in which “Lomo ambassadors” organise their own events – Lomographicshoots, competitions and LomoTours – and exhibitions, including “LomoWalls” from Moscow to New York: collages in which up to 20 000 Lomographs are pasted together.

Right – so it is fun and fashionable. But what is so special about the Lomographs that this camera produces? One user told of the “cheap, colourful, little out-of-focus, sharp, light-dark, yellow-red-blue-green pictures made using a Lomo”, another talked of them being “blurred, streaked, and strange-looking”. Both are adequate ways of describing Lomographs, which tend not to be “good” photographs in the historical sense that photographs should be focused, subject-based and conforming to traditional standards of pictorial space. No, a good Lomograph could be of a yellow line on the road, or a dog’s legs, or the view through a letter box – whatever the world yields to the Lomographer, really.

Some of the charm of Lomographs is due to the camera’s technology. A special coating on the lens creates brighter colours and the 32mm lens helps create slightly distorted images that are darkened around the edges. A Lomo works best with cheap, 100-speed 35mm film, and it is very simple to use, encouraging those baffled by the complexity of tank-like SLR cameras.

London’s Lomo embassy is in Clerkenwell, and is run by designers Fabian Monheim and Tom Napper, who have set up a small gallery in an old locksmith across the road from the offices of design consultancy, Fly Production. Monheim and his colleagues are enthusiasts for the Lomo, as one might expect. But they have also started to use the camera for professional jobs. “I’ve always used cheap cameras and enjoyed ‘accidental’ photography,” says Monheim, who was delighted to become a UK “Lomo ambassador”. When they took on the posting as London’s Lomo Embassy, they started with 25 cameras and sold out in a week. Since then, between 70 000 and 80 000 Lomos have hit the British streets.

Fly has since made fashion advertisements, menus, illustrations and pages using Lomo images. Some are old “stock” photographs that have been applied illustratively to jobs, but increasingly Fly is using the Lomo as the first stop. “It’s not just the camera, it’s the attitude that it brings,” says Napper. “The Lomo makes you deconstruct your approach to the world. It’s a way of seeing.” The way that they tend to use the Lomo is by cross-processing – shooting on slide and developing on negative, to enhance the particular Lomo colours.

They explain the core of the Lomographic project as a set of user tenets: “be quick, don’t think, be open to your surroundings, absorb everything, collect and enjoy communicating”. Devotees should carry their Lomos all the time, and shoot off masses of film at random impulse.

This sounds additionally crazy when you realise that Lomographers do not necessarily hold the viewfinder to the eye, but instead shoot from between the legs, the floor, above the head: from anywhere, really, the idea being to take as many Lomographs as possible, then get these developed as cheaply as possible. You should carry a Lomo all the time. The 32mm lens “encourages you to get close to the object”, says Napper, and the way that the darkening borders “vignette” the image is important, too.

This methodology – which has virtually become a manifesto for Lomographers – is simple, but for adherents it has become a philosophy of perception, a chance and automatic approach that recalls Dada and Surrealism. Of course, lots of Lomo pictures get thrown away. But when they are good, they really do seem to have another take on life.

It is akin to the Dogme filmmakers, according to Napper: a return to raw visual communication as a backlash against the multi- functioned, shelf-to-obsolescense decadence of the communications technology boom. “A Lomo is the ideal tool for a visual diary because you don’t take ‘precious’ pictures,” says Napper. “There’s a documentary feel to a lot of Lomo work in the way it records fragments of ordinary life.” Some of them look a bit like Martin Parr’s work: saturated colours, foreshortened subjects, cropped heads and all kinds of artful photographic “mistakes”.

“Parr is great,” says Napper. “In fact, he is kind of a Lomographer without a Lomo.” But as there are no hero snappers in the Lomo world, no-one is lionised quite like him. A Parr snap would go on the Lomowall alongside everyone else’s work.

There are Lomo limitations. “It’s not good for everything,” says Monheim. “I would never use a Lomo to record a work of art, say.” But they have shot weddings on Lomo. “It’s a different point of view,” says Napper. “You might get ten Lomographers, rather than just one photographer. Photographs are normally used to prove an event happened and ‘freeze’ it. Somehow, the Lomo unfixes that event.”

Is it a Trabant or Skoda of cameras? Not really, for although the styling is simple and old-fashioned – and there are technological shortcomings and weak points – the Lomo is not considered to be an inferior product. “It’s more like the Volkswagen Beetle than the Skoda in design,” says Napper. “It has a basic function, it’s fun, simple, easy to mend and has a message of access.” And that is the appeal of Lomography – it can make the most rank snapshooter aspire to the condition of an artist.