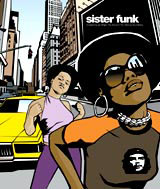 Thomas McCallion is a sleeve designer based in London’s Hoxton who designs for Barely Breaking Even Records. As well as designing covers for Masters at Work, his extensive portfolio for the label includes design work on compilations such as the Funk Spectrum and Disco Spectrum series, along with other BBE albums such as Beats and Pieces, Strange Games and Funky Things.

Inspiration comes from many sources, not least his bad smelling shoes. For Strange Games III, McCallion used the photography of a long lost Vietnam photographer Michael Joseph. For Jazz Spectrum II it was a lino design from a friend’s bathroom, that was replicated on the embossed cover. BBE gives him a very free hand, he says.

“The Strange Games series called for pictures of people up to strange things. We found Michael Joseph, who had been a photographer in Vietnam and had all these unused shots that were just right for what we needed,” says McCallion.