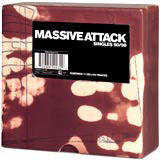 Tom Hingston designed flyers for the legendary Blue Note nightclub in London’s Hoxton Square while understudying Neville Brody. His album covers include Talvin Singh’s Anokha and the D&AD Award-winning covers for Massive Attack’s Mezzanine. The four-strong Tom Hingston Studio is now working on the Bristol group’s next album, due out in the new year.

Hingston says: “We tend to work in close collaboration with artists themselves rather than going through the record company. I’m very selective about who we work with and I turn projects down if I’m not inspired by either an artist or their music.

“As we work this way we don’t have to compromise creativity. We always strive to experiment with the packaging – even a CD pochette made from board is more tactile than a plastic dual case. Take the heat sensitive box set we did with Massive Attack, unless you work directly with an influential artist you don’t usually have the persuasion power to make things happen. The crux of the problem is that retailers aren’t receptive to inventive packaging: if it doesn’t fit their racking they don’t like it,” adds Hingston.

For the cover of its latest design, Robbie Williams’ album Sing When We’re Winning, the studio – in collaboration with artist Paul Smith – did a three-day shoot at Stamford Bridge, home of Chelsea FC, casting Williams in a series of ironic guises.