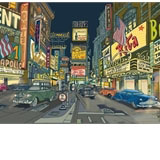 There are few designers today who could rival Javier Mariscal’s claim to the description ‘multidisciplinary’. Operating out of his Barcelona-based Estudio Mariscal, the 56-year-old expresses his personal creativity with drawings, paintings, comic books and sculpture, and addresses industrial contexts through furniture, textiles, household goods, graphics, commercial interiors, installations and animation. Now his restless imagination is exploring a new frontier: the big screen. The €10m-budget (£6.7m) Chico & Rita will be Mariscal’s first feature-length animated movie, and work on the lengthy project has just begun.

Chico & Rita is a collaboration between Mariscal and Oscar- winning Spanish film director Fernando Trueba, who is also a renowned music producer. The pair met in 2000 when Mariscal provided a poster image for Trueba’s latin-jazz documentary Calle 54. The working relationship rapidly expanded to encompass the film’s soundtrack CD and website design, followed by a spin-off record label and Madrid nightclub, both also called Calle 54. ‘It was like finding a new brother. So, quickly, he became a very, very close friend,’ says Mariscal.

But the idea for a feature film took flight after Mariscal created an animation for the song La Negra Tomasa by Cuban musician Compay Segundo. ‘Fernando saw it,’ says Mariscal, ‘and said, “Woah, this is fantastic! I love how Havana is.”‘ Soon the pair were working on ideas for Chico & Rita, described by its UK-based co-producer Magic Light Pictures as ‘a passionate animated Cuban love story’.

The film begins in late-1940s Havana where piano player Chico falls for beautiful singer Rita. It segues to New York, where Rita sings on Broadway and Chico plays with jazz legends such as Dizzy Gillespie and Tito Puente, then diverts to Hollywood and back to Cuba – all the while exploring what producer Martin Pope calls ‘a great love tormented by impossible forces’. The film celebrates a time, says Mariscal, when ‘Afro-Cuban musicians gave a lot of new rhythms and new life to jazz and American music’, and also captures the decadent energy of pre-Castro Havana. ‘It was a very crazy period,’ he continues. ‘A lot of money around, a very rich nightlife, with the Mafia, big cars, hotels, fantastic nightclubs and casinos. It’s an excuse to present a very warm, light and wonderful Havana, and also a crazy, beautiful night, with wonderful boleros. Bolero is a feeling of life, a philosophy of life – it’s a weather, it’s a fashion, it’s a way to spread the love. And then, the New York of the 1950s, the jazz ambience, the musicians. I think it can be wonderful. I’m very excited by this project.’

For Mariscal, the film represents a new middle ground between his own art creations and Estudio Mariscal’s client business. ‘It’s very strange, because it’s very personal, and at the same time I know it’s industrial, because it’s many people and I am not an animator. When I make animations they are too artistic, completely crazy, not realistic.’

Chico & Rita also represents the coming together of many of Mariscal’s influences. ‘Matisse, many French comic books, like Jacques Tardi, Hergé’s Tintin, Little Nemo, Krazy Cat, Crumb, the underground. Many, many references. Infinito. I was born in the 1950s, so I was always fascinated with American cars, with the pretty girl, the neon, New York, Broadway, Las Vegas, LA avenues, the palm trees. When you see for the first time pictures from Havana, it’s fantastic.’ 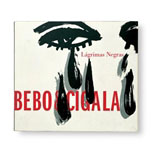 Mariscal aspires to match the impact that certain highly visual film-makers have had on him. ‘I know the first time I saw Wallace & Gromit was a big shock for me. It was, “Wow, wow, wow! This is fantastic. This is very British, it’s wonderful.” I understand, I love it. It’s a wonderful work of somebody who makes the best of his life in these little characters, and they’re so strong and so good. It’s a good feeling. You feel like, “Thank you very much Mr Wallace and Gromit [Nick Park]. You gave me a lot.” I love the man who made Big Fish – Tim Burton. I don’t know him, but one day if I see him I will say,”Thank you very much for your work, you helped me a lot. You told me wonderful stories, with every little detail you express wonderful things.” So, this is my dream. I hope one day many people will see Chico & Rita and will like it, and will say thank you to have this wonderful story of the very nice, sexy girl and the music.’

To the suggestion that cinema might offer the most intense and complete expression of his creativity, Mariscal is initially in agreement. ‘Yes, of course, cinema and music is the best.’ Then he considers the topic some more. ‘Well, I don’t know if it’s best or not, but it’s very different. You can touch many things. You take part of your own life and a period of time and its people, 90 minutes, and you have this conversation together. This is not usual. When you work in colours and lighting, in characters and movement and voices, and these kinds of rhythms and music, you can say many things.’