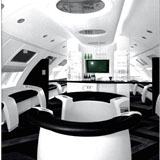 The exclusive club of private jetsetters is no longer, nor are those gaudy, ostentatious interiors – designers are being invited in to refine cabin space to cater for a new generation of luxury travellers, says Clare Dowdy

‘More money than sense’ is the general view of the private jet clientele. But that’s not because such aircraft are a bad idea in themselves. In this age of tightened security and terror threats, the time saved and safety gained on a private jet are irrefutable benefits.

‘More money than sense’ better refers to the insides of these craft. If they are genuinely privately owned, then the interiors could well be a terrifying cocktail of footballers’ WAG-chic and luxury yacht styling. And if they are part of fractional ownership schemes – as the majority are – they are likely to be bold yet bland.

For it is unusual for professional design consultancies to get involved with executive jets. Normally, the individual private owner – young industrialists, footballers, racing drivers – get their ‘design guru’ or designer mate to deck the space out. These so-called ‘curtain pickers’ create something that oozes opulence, though they are likely to have, as Ian Dryburgh, managing director of Acumen Design Associates, puts it, ‘little or no grasp of what might work in a limited space’. Meanwhile, the corporate fleets that end up in fractional ownership are often Playmobil versions of the worst taste in old American cars. 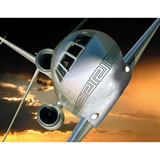 However, the private jet market is going through a boom, and jet manufacturers old and new are looking to cash in. So, for example, at the end of August, Bombardier announced a 17 per cent hike in shipments of business jets in the past quarter; and new-jet-on-the-block HondaJet should be to be ready for take-off in 2010.

And what’s more, these jet companies are starting to get ‹ serious about interiors. Which means that at last the sensible consultancies are getting involved. BMW’s DesignworksUSA has created some very decent interiors for a range of private jets for the Brazilian firm Embraer. Dryburgh describes DesignworksUSA as setting the benchmark and bringing a level of professionalism to the sector.

Meanwhile, Priestman Goode has just won a contract for the interiors of a new executive jet, which will start to appear in a year’s time with a number of formats on offer. Acumen is also moving into the corporate jet area, and is soon starting work on a major all-new corporate jet programme, aiming to bring a level of innovation and professional design to it. Dryburgh says this will be a high volume sales project, meaning hundreds will be sold a year rather than tens or single figures.

These consultancies are getting their heads around issues such as the multifunctional use of space, taking advantage of the environment if it’s not full. When such space planning and layout are in place, styling will follow.

On a more fashion-led note, Versace Design, a subdivision of Gianni Versace, seems to be trying to bring a level of professionalism to the one-off brigade with its new design service for private jet owners through TAG Group, parent company of TAG Aviation.

According to a Versace spokesman, ‘Versace will help those who fly in style to establish the floor plan of their aircraft and then create an exquisite and uniquely personal luxury interior.’ Described as a ‘turnkey service’, it will include lamps, vases, plates, glasses, tables, beds, closets, chairs and sofas. 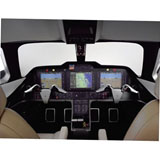 Catering to an individual’s quirky tastes is fine if that individual is the only one using the plane. But when owners want to see a return on their investment, they will want to lease it out to handsomely paying customers.

Companies like NetJets, SkyJet International and Air Partner either manage a privately owned jet’s down time, or set up a fleet of jets themselves for fractional ownership.

In fact, Air Partner, the world’s largest aircraft charter broker, has just launched its JetCard membership scheme, with branding by Start Creative. The idea is that private individuals and businesses can buy private jet airtime upfront, to be used when they need it.

The JetCard, says Start Creative executive creative director Darren Whittingham, is aimed at 40-year-old men with a couple of cars, a couple of houses, and £3m to £5m in the bank. ‘That market is going to keep growing,’ he says, and he wants them to use JetCard when they go on holiday with their family and not just for business travel.

For Priestman Goode director Paul Priestman, being able to design a fleet of private jets from scratch means going for a bespoke, handmade feel. ‘There’s the opportunity to use sophisticated techniques to create luxurious feel,’ he says, citing ambient lighting and hi-tech, lightweight materials and finishes. He waxes lyrical about transparencies and translucencies, and the use of titanium in favour of aluminium. ‘This will be much more than just a painted wall,’ he says. In contrast, he describes a passenger jet as ‘all vacuum formings and bits of plastic’. 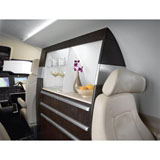 And getting their hands on an executive jet will allow Priestman Goode’s designers to really think about reinventing the whole experience. ‘The entrances to passenger aircrafts look like the back door, you have to go past the kitchen and the toilets to get to your seat,’ says Priestman. ‘With an executive jet, it should be like arriving at a beautiful hotel. So we will consider every detail, right down to where you put your umbrella.’ Even the WAGs should appreciate that.