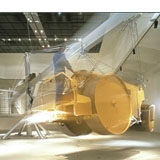 Period features are a favourite of chintzy cultural quarters. So the thought occurs that Chris Burden’s display of 14 Deco-ish street lamps – 1920s Los Angeles originals and each a tonne-and-a-half of cast-iron – might be a subtle dig at regeneration aesthetics, particularly as this is the last show at the South London Gallery before 6a Architects begins its revamp.

Yet the 60-year-old Californian’s recent work, including Meccano bridges and miniature skyscrapers, suggests he is too enthusiastic for that. An off-site exhibit, The Flying Steamroller, is the dream-memory of a school-kid’s awe at the wonder of machines. Almost touching the ceiling, the lamps are municipal totems – symbols, Burden has said, of ‘what constitutes a civilised and sophisticated society’. In his eyes, these objects are majestic, and he is happy to honour their power.

Historically, this is quite a change of tack. Daredevil antics as a 1970s performance artist, which involved Burden being variously shot, electrocuted and ‘crucified’ on a VW Beetle, earned him the epithet ‘the Evel Knievel of the art world’. Today, with a grandfatherly interest in feats of engineering, he is more like Fred Dibnah. His remains a Boy’s Own story, then.