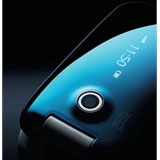 To remain prominent in the mobile market, manufacturers need to strike an intelligent balance between style and specification, says Scott Billings

Product design at its most effective offers users a solution-providing piece of equipment, while at the same time giving aesthetic and emotional pleasure gained from its use. In consumer electronics it is the marriage of technology and emotion – the nerdy and the beautiful – which forms the user’s overall experience of the product.

This marriage is arguably nowhere more at the forefront of product design than in mobile phones – devices which have already far transcended their original purpose of making and receiving telephone calls, and blossomed into multifarious little gizmos delivering music, e-mail, blogs and, importantly, a sense of style. All the major handset manufacturers are influenced to some degree by fashion trends and each tries to imbue its handsets with an aesthetic cachet that will elicit an emotional response, while simultaneously packing in the functionality.

Samsung’s X820 model, unveiled earlier this summer, claims to be the slimmest mobile ever, measuring a mere 6.9mm from front to back. Sony Ericsson’s new mirror-surfaced Z610 offers three colour-accent variants – shimmering in black, blue and pink. These phones illustrate two different approaches to the marketing of design achievements, the former based on quantifiable spec and the latter on tactile allure. Meanwhile, Nokia has just unveiled the latest salvo of spec-heavy, style-conscious phones taken from its L’Amour range, first launched last year (DW 27 October 2005).

According to Mark Delaney, director at product design and strategy consultancy Plan, cultural differences in design teams influence the way the designs are promoted to consumers. ‘The Asian brands like Samsung and LG Electronics like to have a feature they can put a specific figure next to, while Nokia is better at emotional stuff. So Samsung’s latest model is “the thinnest in the world”. For the Korean groups this is to do with cultural approach: historically, it would just take somebody else’s product and make it cheaper, and the need for figures is a hangover from that,’ he says.

The ultra-thin route, driven by US company Motorola’s Razr and further developed by the Samsung X820, has so far been resisted by the European-influenced manufacturers Nokia, based in Finland, and Sony Ericsson, which has its Creative Design Centre housed in Sweden, home of Ericsson, rather than with Sony in Japan. 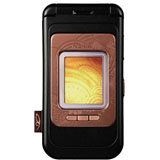 ‘Why should we do something just because Motorola has done it? We have better and different solutions to the Razr,’ says Sony Ericsson vice-president Michel Sabouné. But Rikko Sakaguchi, senior vice-president, product application and planning, for Sony Ericsson, acknowledges the continual shift toward smaller devices. ‘Thin is always part of the technological drive, but it is not a case of making it thin for the sake of it,’ he says.

While the prevailing trend is to market consumer handset designs by pushing their fashion and aesthetic appeal, manufacturers are nonetheless required to make constant technological innovations – more megapixels on the camera, better access to the Internet, greater storage space for music files and so on. Acknowledging this, Nokia’s latest attempt to unify hi-tech with high-style is a trio of fashion phones led by the 7390, the company’s first 3G fashion model.

‘We are trying to fuse the two together in the fashion range; to reach the Holy Grail of style and substance,’ says Silas Grant, Nokia senior design manager for fashion and premium. ‘But we are not not like Gillette razors, where it’s “yours has got four blades, mine’s got five”.’

Two years in development, the 7390 takes its decorative cues from Eastern, Arabic and ‘tribal’ influences. Its casing includes geometric patterns, a leather piece on the back of the handset and dry paint finishes. But on the spec sheet there is also a 3-megapixel camera and interface support for a 2GB memory card.

‘In terms of fashion influences, we try to pick up the macro trends – the larger movements that are happening over a period of time. This is because in product design it takes a bit longer [to complete a project]. But we’re really pushing style and substance now,’ adds Grant.

Korean group LG Electronics has also tapped into the need to present a softer, aesthetic side to its phone technology with Chocolate – a product promoted not by its model number, but after the slab of chocolate that it resembles. Delaney believes it is LG’s first breakthrough phone and LG last month predicted that it will sell 2 million of the handsets in Europe this year. Conversely, analysts last week reportedly blamed falling profit margins at Korean rival Samsung on lacklustre product design, with a portfolio lacking a flagship, wow-factor mobile phone. 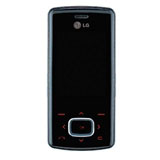 And when it comes to blending style and performance, Apple Computer ever looms on the horizon. A move into the mobile phone sector – most likely with an iPhone product – is long-awaited. According to Delaney, whatever Apple does deliver will have to be impressive, or it risks being cut out of the music market by the increasing music capacity and improving interface design of some mobile manufacturers. ‘Although still lacking the experience of iTunes, where everything synchronises together, other phones are not far away from catching up, so Apple can’t not do it. And with all the hype, it really needs to be jaw-dropping,’ he says.