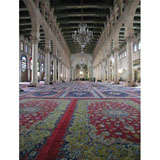 One of the challenges in designing the Jameel Gallery of Islamic Art at the Victoria & Albert Museum was to evoke a subtle sense of Islamic space, without resorting to pastiche. To unlock the puzzle, we visited Egypt, Syria, Turkey and Iran to appreciate the context in which the artefacts had been produced and enjoyed.

In trying to reconcile the Italianate architecture of the V&A with the gallery’s content, a key point of reference became the Umayyad Mosque in Damascus (pictured top). There, the colonnades of the prayer hall are the product of the re-use and adaptation into an Islamic space of what was once a Roman temple and then a Christian church. 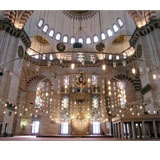 For the dramatic central display of a giant 16th-century Ardabil Carpet, we surveyed its original location, in north-west Iran. In the finalised gallery design, the carpet sits beneath a suspended canopy, which is redolent of the chandeliers and lamps we saw in many great Islamic religious spaces, most notably the Mosque of Sultan Hasan in Cairo and the Süleymaniye Mosque in Istanbul.

Certainly, this first-hand experience of the breadth and splendour of Islamic architecture helped imbue our own design with the degree of sophistication that the project demanded.