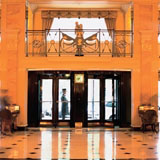 The Dorchester Group hotel chain is to be rebadged in November with a new group company name. The brand identity will be designed by Pentagram and strategy undertaken by Schmidt & Co.

The move to rebrand the high-profile group, which includes some of the world’s most iconic hotels, such as The Dorchester in London and The Beverly Hills Hotel in Los Angeles, comes as the group embarks on an aggressive expansion plan to grow its portfolio of hotels from five to as many as 20 international properties.

Pentagram London partner John Rushworth has been the creative lead on the project, which has been headed by Schmidt & Co founder Piers following a strategic review of the business. Pentagram was appointed 18 months ago.

The new group identity is being kept under wraps until a planned launch in November, but Rushworth hints at what the revamped brand will look like, explaining that the identity will feature a new name and monogram. The colour palette will be black, white and silver. The brand identity will be supported by a fresh collection of photography featuring portrait shots of the hotels.

The Dorchester Group will also relaunch its group website, with an overall design by Pentagram. The individual hotel websites will also be tweaked in line with the new branding.

‘The name change will be an evolution, not a revolution. The clue is that the individual hotels remain as the stars. The role of the group brand is to communicate how they are connected. It will not compete, but will complement the hotels. The aim is to grow the group and add more hotels, and this brand identity will work across that,’ says Rushworth.

A spokeswoman at The Dorchester Group confirms that the company has ambitions to expand its group of hotels to include between 15 and 20 hotels in the long term. ‘We are looking for landmark buildings in gateway cities with an optimum size of 250 rooms,’ she says.