International design studio Saffron Brand Consultants has created the new visual identity for the Crown Estate, inspired by its mantra of “people, place and purpose”.

The new work comprises a reworked brand system including typefaces, colour palette as well as a bespoke set of illustrations. It’s been developed closely with the Crown Estate’s internal team, according to Saffron.

Established by an Act of Parliament in 1961, the Crown Estate is an independent business which owns and manages work, retail and tourist sites in central London including Regent Street and St James’s. It also runs more rural locations such as Windsor Great Park and the seabed around England, Wales and Northern Ireland.

All of its profits are returned to the Treasury and used in the development of various sectors, from renewable energy to the future of urban living. 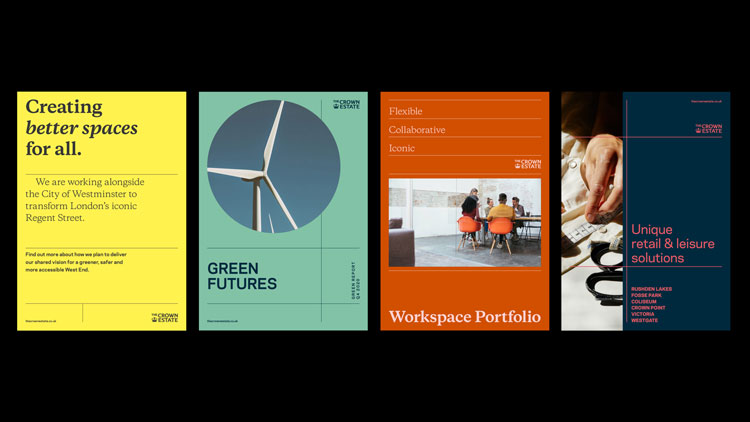 Saffron director of brand strategy Charlotte Black says that one ambition for the new work was to do away with “misconceptions” people might have about the estate.

The identity had to work across the brand’s many sectors, tying together “people, place and purpose”, she says. As well as more traditional spaces, the company is also moving into newer sectors such as co-working spaces.

“The Crown was always sitting behind something – it was never the thing in the public eye,” adds Saffron design director Drew Coughlan. An ambition for the identity was to bring the estate to the surface so that people became more familiar with its work, according to the designer.

Another challenge was shifting the estate from a “corporate entity” to one that faces business, government and consumers. This required a “huge amount of flexibility”, Coughlan adds.

“We went on a treasure hunt”

An “immersion period” preceded the design work, Coughlan says. “We went on a treasure hunt,” he adds, which included a guided ride through Windsor Great Park, where the team saw popular filming locations.

What emerged was a need for “greater flexibility” in asset creation as well as a clear link across the estate’s numerous sub-brands, Coughlan says. The crown logo and wordmark are unchanged.

The colour palette has been expanded to create more “visceral” links within the identity, he says. Shades are linked to various locations within the estate’s portfolio such as a moss green, the designer explains. The wider choice, from muted tones to more vibrant shades, allows the brand to shift tone more easily, Coughlan adds.

A combination of sans serif font Galaxie Polaris and serif Galaxie Copernicus have been chosen for the new identity. The typographic system also allows communications to be more flexible when it comes to tone, Coughlan says.

“The use of typography and colour give a flexibility to the system it didn’t have previously,” he adds. This allows the estate to create a range of assets while remaining under the master brand, according to the designer. 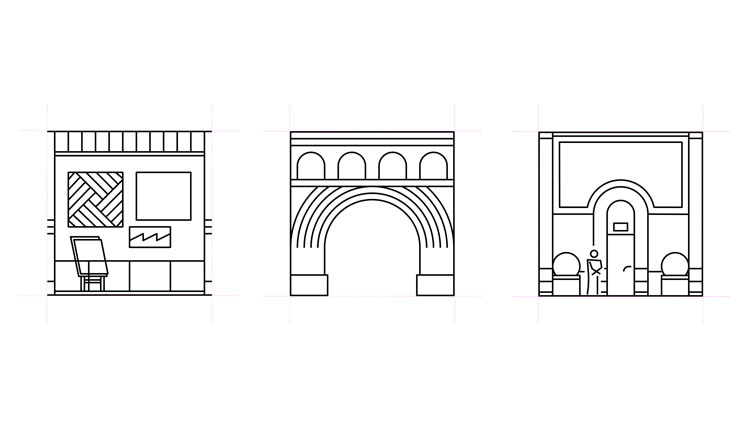 A modular set of illustrations has also been designed by the Saffron team. “It’s like a Lego set,” Coughlan says. “Each of them is like a tiny square and you can bolt them together.”

The illustrations are based around retail, residential, office, commercial and energy sectors. Windsor Great Park is depicted as well as a series of wind turbines for the UK’s renewable energy sector, for example.

“No matter what area of the business you’re working in, you have a toolkit of illustration that you can use to pull together little narratives,” Coughlan says. This illustration style has been extended into a line-based iconographic set for wayfinding and signage across the estate’s assets.

“Historically, there was a one-size-fits-all approach with putting the Crown Estate stamp around,” she says. “We created a system that would allow the brand to live and breathe and showcase the full spectrum of its eco-system.”

This partly involved bringing a “more human and approachable” side to the organisation, Black says, reinforced through lifestyle-inspired imagery and art direction. The imagery is grouped into three pillars: Place, People and Point-in-time.

What do you think of The Crown Estate’s new identity? Let us know in the comments below.

Coca-Cola tests paper bottle but is it the answer?