“We’re talking about it almost as if electricity has arrived,” says Fredrik Hellberg. “It’s so massive, and there will be so many interesting and also problematic things.’

Hellberg is one half of Space Popular, a multidisciplinary design studio based in London. He is talking about a virtual exhibition space he has recently brought to life along with the studio’s co-founder Lara Lesmes. The virtual reality (VR) space is a “translation” of a physical exhibition that was held by RIBA (Royal Institute of British Architects) at its Architecture Gallery in London. While Freestyle: Architectural Adventures in Mass Media was never meant to have a virtual accompaniment, its real-life closure because of COVID-19 meant that RIBA commissioned the designers to create an online space. 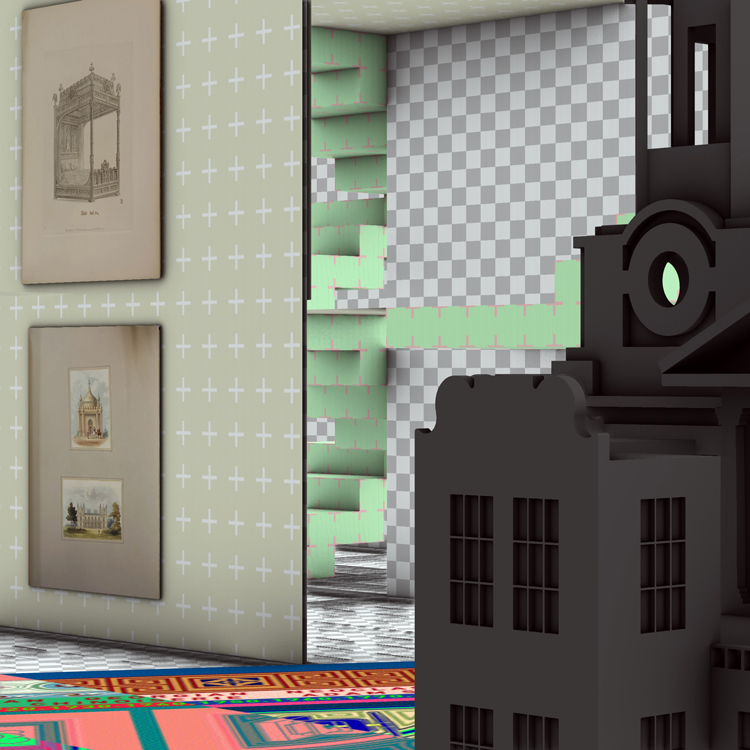 At RIBA’s physical exhibition space, there were large-scale models of British buildings which had been “abstracted” from RIBA’s archives, which aimed to depict the transformation of historical styles over time. There were four stages to the exhibition, exploring time periods throughout history up until the present day.

The virtual space redesigned the Architecture Gallery’s space, though much of the content remains the same. Lesmes and Hellberg explain to Design Week that it was relatively easy to move the exhibition to a virtual space, as models had already been designed for the real exhibition. For this reason, it only took a few weeks to put together. This simplified the process, but also meant that their choices were more limited. If it had been designed with a virtual space in mind, the research stage would have been greatly different, the designers say. “You are free to make worlds that are much bigger, at no extra cost,” Lesmes says.

It can be attended through a mid- to low-level computer in a bid to make it more accessible. It’s also run by the Mozilla foundation, which Hellberg chose because it’s “based on the manifesto of a healthy internet”, which is important to Space Popular. The entire virtual space is “built with accessibility in mind”, he adds.

How do you make a virtual world feel real? 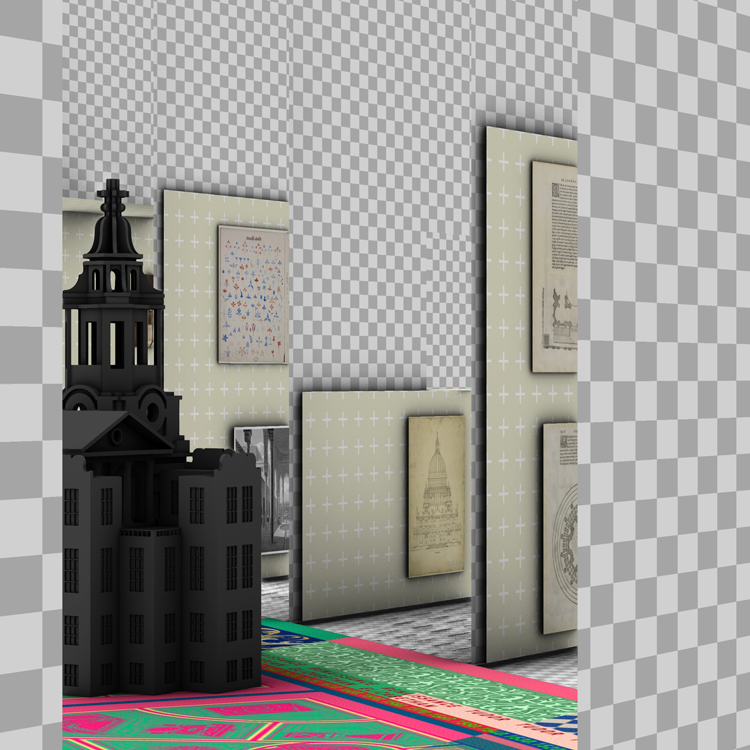 Though Space Popular has been working in these virtual realms for a while now, it will still be new for most people. At the opening, visitors appeared as avatars – which took the form of orange pandas – and were guided around. Because of the relative strangeness of this technology, it means that the design has to be clear, they say.

Affordances – cues which make clear an object’s purpose is and how it should be used – are essential. The use of staircases, for example, which shows that there are more spaces available to view. “Easy” elements like this are key, Lesmes says, for visitors who may be unfamiliar with virtual reality. Conversely, this allows for some freedom with the overarching exhibition design. While the space has to be clearly signposted, exhibition don’t have to be so narrative-driven . “You usually never get lost in an exhibition,” she says, but when space is not a constraint and visitors can go at their own pace, there’s more freedom to the design.

Some of the language around this area is conceptual – the medium of VR is a comment on how architectural style changes, Space Popular says – but it has real-life practical benefits. All you need to access the gallery is a computer and internet connection (though it does require a significant amount of power), which means that it’s no longer dependent on your access to a major city like London.

That people can experience the exhibition as a “social experience” is another highlight of a VR exhibition, RIBA exhibition curator Shumi Bose says. The videos in the exhibition can be watched together for example, instead of with the headsets that are usually available at real life exhibitions. As well as more “democractic” technology access, there is a question of “intellectual accessibility” too. The VR platform has the potential to engage a younger audience, for instance. As a curator, Bose also has to guide tours through the exhibition – something she is able to do from the comfort of her own home. On the day we speak, she has fifteen visitors to show around from all around the world.

It is also free, and you can visit at your own pace, which might help visitors appreciate the exhibition. For the near future, even when institutions do open there might be restrictions for social distancing. A virtual space would do away with any such issue. Lesmes also points out that some exhibition information is better suited to an online space; archival information – which can link out to its own website – is a more friendly user experience in a virtual world than the physical one.

The Virtual Online Museum of Art is billed as the world’s first virtual museum. Unlike museums and galleries that have made virtual spaces – like RIBA’s, for example – it is attempting to set itself apart as a destination in and of itself. It will bring together art on loan from institutions around the world, as well as host contemporary art exhibition. Headed up by British artist and curator Stuart Semple, VOMA is the result of a multi-disciplinary team.

While a physical space might require an architect, exhibition designer, and graphics team, their virtual counterparts require more technology-focused teams. As such, some of the creative roles are sometimes blurred. Emily Mann, the architect who worked on VOMA, has also covered the design details of the museum. It’s currently in a soft launch state – the platform’s engine needs to be lined up with its server. Mann says it’s now about “bumping up the bandwidth” so that a greater number of people can walk around at the same time.

How did Mann design a space that is the first of its kind? “This is a situation where it’s its own world,” she says. There’s no reference to a sci-fi world or a computer game to riff on, for example. Mostly Mann was inspired by Japanese architects post-war who were driven by the idea of “starting again”. From this, she created a building with a “natural form”. 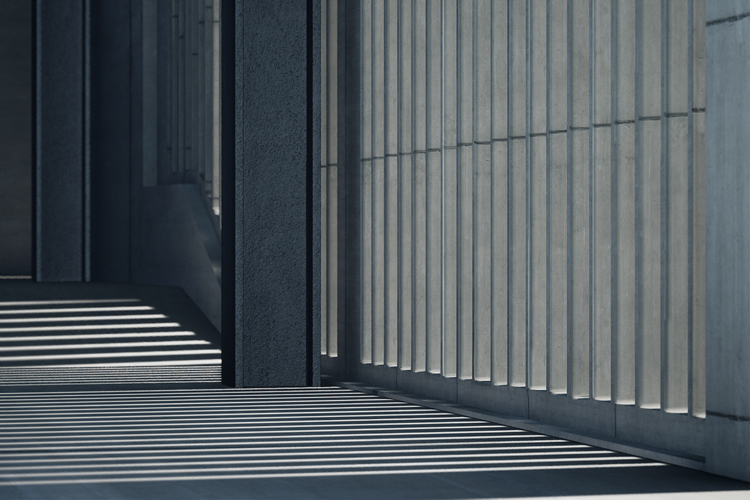 Mann says that the design processes has been a “collaboration” with the graphics team – working out what is possible and accessible. The emphasis has been to ground the space in reality, she says. The surfaces look like real surfaces, and appear different according to lighting (there are also changing seasons and times of day in VOMA’s world). Mann says this degree of realism sets VOMA apart from other virtual spaces – for example Googlemaps uses photos to display places, so that when you move around, you realise they are a façade.

She is also free from some more mundane design neccessities. There are no handrails, she explains, because there are no hands. The same goes for fire escapes or steel beams for architectural support. Logistics in a virtual museum are much easier, she lists as another positive. It’s “mind-blowing” to be able to drag and drop a Rembrandt, for example. “It has a realness to it,” she says. “Apart from being able to travel, it’s the closest you can get.”

The future of virtual galleries

It can be added to, extended to and moved easily. The inside surfaces and internal structures can also be altered. “You can beautifully play with the textures and feelings,” Mann says. After the launch, what is the future for VOMA? The design team is trying to build in more social areas – like a café or museum shop, so you can have that “incidental time” with another person. For people who do not have access to a city full of galleries and museum, this could provide meaningful experiences she says.

These virtual galleries are new ground, and while the the design cues may be familiar, it will take time for visitors to get used to them, though clearly COVID-19 has given it new urgency. VOMA art director Lee Cavaliere says that he hopes a virtual space will remove the elitism associated with some museums.

“The aim of VOMA is to open access to as many people as possible; anyone, in fact with an internet connection,” he says. “People who have never, and perhaps will never, step into a museum will have access to art from throughout history, alongside very current works and issues.”